"To remember the past is to work on the future"

8 May 2020 marks the 75th anniversary of the end of the Second World War – In an interview, Aleida Assmann, Konstanz professor for cultural studies, explains how the way this day was perceived shaped the culture of remembrance in post-war Germany.

In her research, Professor Aleida Assmann, professor for English and literary studies at the University of Konstanz from 1993 to 2014, explores the history of memory and the culture of remembrance. In an interview, she comments on 8 May 1945 and explains, among others, how the day of liberation or the day of the German Wehrmacht’s unconditional surrender, which will be commemorated for the 75th time in 2020, has shaped the culture of remembrance in post-war Germany.

Ms Assmann, how much room does history, does remembrance, need in our society?

To be honest, everyone must decide that for themselves. Anniversaries make room temporarily for a certain snippet of history, and the public media support this and make suggestions, but there is no obligation to remember.

8 May 1945: Day of liberation and day of the German Wehrmacht's unconditional surrender: Which of these two had a greater influence on the culture of remembrance in Germany?

That depended on each generation and its respective experience. For the war generation and the soldiers taken prisoner on that day, it felt more like a defeat, while their children and grandchildren today remember the liberation by the Allies together with the victors.

You once said: “To remember the past is to work on the future.” Has remembering the past in the sense of working on the future been successful in post-war Germany as far as 8 May 1945 is concerned?

While 8 May in the GDR, like in all other Soviet states, was commemorated each year from 1950 onwards as the day of liberation, in West Germany it took longer before this day was commemorated. Willy Brandt and Gustav Heinemann were unable to achieve broad acceptance for this idea. You don’t celebrate a defeat, it was said at the time. It was Germany’s Federal President, Richard von Weizsäcker, who, 40 years later, gave the day a new meaning – from the perspective of a man who had been involved in this war as a soldier from the very first day: As a public commitment to shifting Germany’s identity from the Nazi state to the west European community of nations.

"You don’t celebrate a defeat, it was said at the time."

In this context, how do you view the increasing instrumentalization of this part of German history by right-wing political powers?

It’s surprising that where the 8th of May victory celebrations were compulsory, like in the GDR, the mood swung after the fall of the Berlin Wall and right-wing groups in Dresden condemned the Allied forces’ bomb raids. They were not prepared to identify with the Western victors and presented the Germans as the collective victim.

Of course, the members of the next generations were not the perpetrators. Who ever said they were? The concept of guilt gets us nowhere here, only the concept of responsibility. It makes all the difference whether or not you live in a country where the insane idea of exterminating all the Jews in Europe originated. Documenting the traces of this annihilation – I’m thinking here, for example, of the “Stolpersteine”, the brass plaques in memory of the victims of National Socialism – has become a project for the following generation. Each further generation can take a stance on this – or not. The AfD’s fight against the German culture of remembrance is also a way of taking a stance – the stance of active denial.


We hear again and again that traumas are passed from generation to generation. An example: A volunteer from the Maximilian-Kolbe-Werk, a relief organization for the survivors of Nazi concentration camps and ghettos, often visits Holocaust survivors or their descendants. She described the case of a Roma woman who, as a small girl, had to watch how her heavily pregnant mother was forced to dig her own grave and was then killed. The woman herself has a daughter with major psychological problems. She has to stay alive for her, look after her, says the woman, who is meanwhile well advanced in years. Both women are in a bad way. Is this also a case for collective memory?

This is rather a case for individual memory. Psychotherapists have confirmed again and again that experiencing extreme violence leads to emotional scars (trauma means just that) which not only do not heal over but are also passed on unconsciously by parents to their children as a result of their close relationship and the way they behave towards them.

Memories are always fragmentary and subjective. To what extent is collective memory also subjective?

This is what differentiates memory and knowledge. Knowledge is unlimited and everything is equally important. Memory, by contrast, is limited by emotionality and relevance, which are determined by perspective and references of identity. That’s why memories are always selective and subjective. However, that’s precisely why we must ensure they remain reconcilable with other memories and do not become exclusive.

There are often accounts by the victims, but very rarely by the perpetrators. To what extent does this influence collective memory?

Holocaust remembrance, which has also been cultivated internationally since the Stockholm Declaration in 2000, has led to a greater focus on acknowledging the victims. And that’s a good thing. However, in the process attention was diverted away from the perpetrators and this has rather been left to research. Within the families, for a long time nobody wanted to know anything about the perpetrators’ narratives because they saw themselves as victims. Meanwhile, however, there are signs that the grandchildren are coming to grips with their grandparents’ past, such as Géraldine Schwarz’s book “The Amnesiacs”.

The historical sites remain. Does that help us? Or do we, now that we will soon no longer have a generation of survivors, need a new culture of remembrance? Or even rituals?

The historical sites are very important. Once the contemporary witnesses have passed away, these are the remaining evidence of the Holocaust, not only at the large memorial sites of the former concentration and death camps but also at the places and traces everywhere of annihilated Jewish life. Rituals are also a very important way to preserve memories across the generations.

What role does the culture of remembrance play for peaceful co-existence?

Remembrance can fuel hate and wars – just think of how Milošević used the memory of the Serbs’ lost Battle of the Kosovo in 1389 as propaganda in the Balkan war 600 years later. However, remembrance is not just a means for keeping wars alive but also for actually ending them. This works when national memory not only remembers heroic acts and victims but also crimes, and when mutual suffering is recognized. There are already some encouraging examples, and this at least gives me hope for a peaceful future. 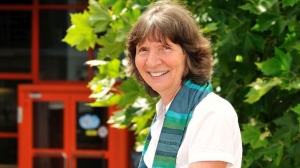 Professor Aleida Assmann was professor for English and literary studies at the University of Konstanz from 1993 to 2014. Her research focuses on generations in literature and society, the history of German memory after World War Two, cultural studies on memory and memory theory, history of reading and history of writing, images of humanity – historical anthropology. She was a principal investigator and member of the executive board of the cluster of excellence “Cultural Foundations of Social Integration” at the University of Konstanz. An internationally renowned researcher, since 2016 she has been a Permanent Fellow of the Institute for Advanced Study Konstanz. Apart from countless other awards, in 2017 Aleida Assmann received the Balzan Prize for her research on collective memory and in 2018 the Peace Prize of the German Book Trade. She was recently awarded the Dr Karl Helmut Eberle Prize 2020, which she received, along with other awards, together with Professor Jan Assmann.