By studying how our brains “synchronise” during shared experiences, Konstanz researchers are shedding light on what makes public health campaigns effective—and in the process paving the way to revealing the neural underpinnings of group processes.

© Image by Raman Oza on Pixabay

Mass media messages form a backbone of public health campaigns. Through web and social media, television, radio, magazines and posters, they can communicate health messages to large numbers of people at low cost. But how these media campaigns effectively increase our awareness of a given health risk, or change our behaviour for the better, is not always clear.

Surprisingly, the field of social neuroscience is providing power to predicting their success. A growing body of neuroimaging research over the last 15 years has confirmed a remarkable fact: human brains become aligned when we hear or see the same thing. Whether it’s an audience watching a movie, children in a classroom, or people talking to one another, brains have been shown to display similar neural activity or “synchronisation” in people who are engaged with the same stimulus.

A team of social neuroscientists in the Department of Psychology are building on this finding to explore the neural underpinnings of group processes—from audience engagement with health messages to the emergence of complex group behaviours. “Comparing the brain responses of people when they are watching the same thing enables us to get a measure of how similarly they see the world,” says Martin Imhof, a PhD student in the laboratory of Professor Harald Schupp, Professor of General and Biological Psychology at the University of Konstanz.

“We can apply this technique in the real world to test collective processes in an audience.” 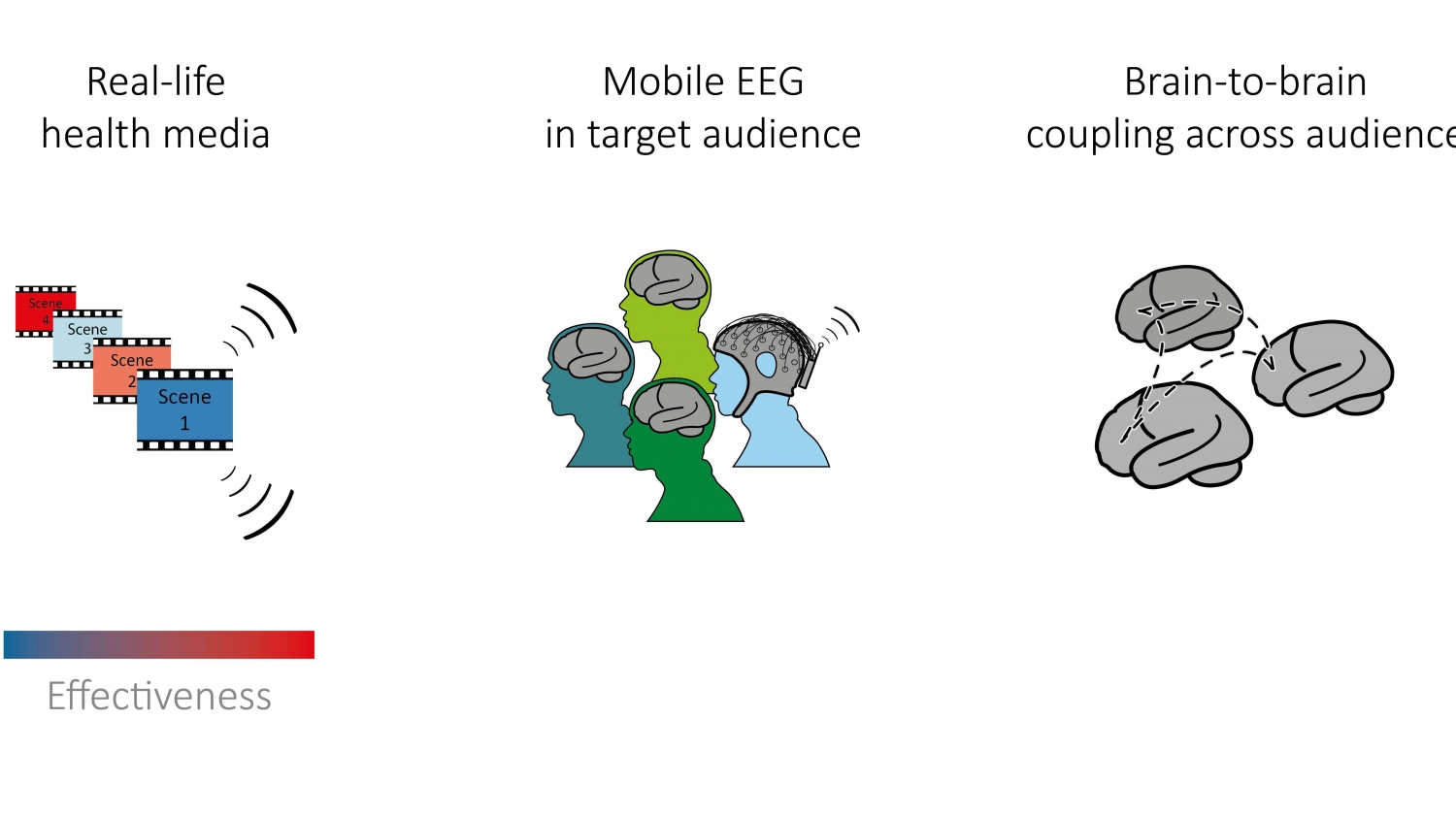 Konstanz researchers have shown that studying people’s brains through electroencephalography (EEG) can reveal the success of alcohol risk messages. This schematic provides an overview of the general concept of the research approach and future studies, here: Brain responses of a target audience during watching real-life video health messages are captured using EEG. Image courtesy of Martin Imhof

Towards more successful messages against risky alcohol use

Imhof is behind a new study in NeuroImage that has applied the science of brain synchronisation to predicting the success of alcohol risk campaigns. Young adults—a high risk group for binge drinking—were hooked up to an electroencephalogram (EEG) while watching real-life health advertisements about risky alcohol use. While all health messages are meant to be effective, in reality some are better than others. The Konstanz research team, which besides social neuroscience researchers Imhof and Schupp also included health psychologist Professor Britta Renner, found out that the stronger, more engaging ads lead to more synchronised brain activity in viewers.

But the study went deeper, exploring exactly what happens to our brains when we watch strong versus weak anti-alcohol messages. The researchers found that responses in brain regions associated with higher order processes, like attention, emotion, and personal relevance seemed to be more highly synchronised across audience brains while watching effective alcohol risk videos. “This shows that we picked up a meaningful signal that goes beyond just seeing and hearing, but demonstrates real audience engagement with messages contained in the video,” says Imhof, who is lead author on the study.

But will a group’s response to persuasive messages at the neural level also forecast responses at the behavioural level? In other words, will an engaging alcohol message lead to lower levels of drinking? To answer that question, Imhof bolstered the EEG measurements with surveys to monitor subsequent drinking behaviour change. He found that the similarity in brain activity during the strong, more engaging videos was associated to subsequent reductions in risky drinking. By showing that neural measures can help to predict health message success, the study shows promise for real world settings.

“EEG enables us to look in detail at how brain coupling changes over time across the audience, which means we can identify key scenes in a video that lead to peaks in coupling.” says Imhof. As the study shows, these peaks in brain coupling could signal more audience engagement.

“Having a tool for measuring which campaign will be effective could be used to select promising messages, which may ultimately save time and money.”

Imhof’s study is based on a discovery made 15 years ago by a scientist named Uri Hasson from the University of Princeton. Hasson wanted to understand what makes movies engaging, so he examined the neural activity of people watching a classic Hollywood blockbuster “The good, the bad and the ugly.” Here he discovered the phenomenon of brain synchronisation—the way in which brains show similar neural activity when exposed to the same media—which he called inter-subject correlation.

Hasson’s study broke ground for a number of reasons, but principally because he studied neural activity of people in so-called “naturalistic” conditions. Neuroimaging studies usually presented subjects stimuli that were discrete, repetitive and bearing little resemblance to our normal experience of the world. Instead, Hasson created a paradigm for showing a longer, dynamic stimulus, opening the door to studying brains operating under more natural and social environments in which humans have evolved.

This marked the beginning of a flowering of research on inter-subject correlation, which included work by the group of Professor Schupp at the University of Konstanz. Ralf Schmälzle, who was then a Postdoc in the Schupp Lab of General and Biological Psychology, teamed up with the Renner Lab of Health Psychology to apply this to his work in understanding the dynamics of risk perception in the field of health psychology.

Health media campaigns, which are key instruments in public health, represented the perfect “naturalistic” stimuli that could be studied with inter-subject correlation.

“You can’t study these videos as discrete stimuli, you have to study them as they are used by the public,”

says Schupp, who is a principal investigator in the research group “RiskDynamics” (FOR 2374), which is funded by the German Research Foundation (DFG), and in the Cluster of Excellence “Centre for the Advanced Study of Collective Behaviour” (EXC 2117) at the University of Konstanz.

Konstanz researchers have shown that studying people’s brains through electroencephalography (EEG) can reveal the success of alcohol risk messages. This schematic provides an overview of the general concept of the research approach and future studies, here: A temporally highly-resolved measure of brain-to-brain coupling is extracted. In the future, peaks in the measure could be used to reveal scenes in the video that specifically “resonate” within an audience and lead to peaks in brain-to-brain coupling. Effectiveness of scenes is colour-coded from blue to red. Image courtesy of Martin Imhof

A focus on health psychology

In 2013, Schmälzle (who is now at the University of Michigan), Schupp, and Renner used functional magnetic resonance imaging (fMRI) to study the brains of people while watching a 30-min documentary on the outbreak of the H1N1 swine flu virus that aired on national TV during the pandemic. The study linked the strength of brain synchronisation in higher order brain areas with people’s level of risk perception about the epidemic. This was followed with a second study in 2017—this time led by Imhof—that examined brain synchronisation during perception of strong and weak health messages about alcohol risk.

The researchers found that responses in brain regions responsible for vision and hearing become more aligned when we are watching a video regardless of how engaging it is. “This is what you would expect,” says Imhof, “because all viewers are taking in the same visual and acoustic information while watching videos no matter the quality of the message.” But crucially, the responses in brain regions associated with processes like attention, emotion, and personal relevance revealed an enhanced synchronisation across the brains of the audience during strong, engaging messages.

This video is a conceptual visualization of what brain synchronization looks like in people watching the same movie. In this case, people are watching a real-life alcohol risk video and their brains are scanned by fMRI to reveal dynamic fluctuations of brain activity. Each of the two brains represents the brain activity of one half of the audience. Blue to red color shows how the average brain activity of half of the group increases (red) or decreases (blue). Regions that show concurring increases or decreases of activity at the same time for both halves of the group can be assumed to show brain-to-brain coupling. During watching the dynamic video, visual regions in the back of the brain are especially “in tune” and show a high similarity as represented by concurring increases and decreases on both brains.

Both studies were important for illustrating the potential of the inter-subject correlation approach to assess how an audience receives health messages. But by using fMRI, they were limited in two ways. First, fMRI has low temporal resolution, which means that data on brain activity is collected about every two seconds. In dynamic media stimuli, where two seconds can be the difference between a love scene and a crime scene, this means that crucial information can be lost. Second, MRI scanners are large devices that produce a strong magnetic field to function properly, so using them is generally restricted to single participants in a laboratory.

EEG, however, offers a solution. With EEG, researchers can capture the electrical activity of the brain non-invasively via a cap of sensors placed on the scalp. Over the last decades EEG recorders have become more and more lightweight and are now even available in a portable version. As a measurement technique for inter-subject correlation, EEG is gaining ground among researchers interested in the tool to help understand how a group dynamically responds to a stimulus, from audience response to fast-paced Superbowl commercials to how students and teachers engage during class.

In their current study, Imhof, Schmälzle, Schupp, and Renner have shown that EEG can be used as reliably as fMRI to study brain synchronisation as a measure of audience-wide responses that are critical for successful mass communication. “The benefit of EEG is that it can be used outside the laboratory and can be hooked up to a group of people simultaneously,” says Imhof. “In the case of assessing anti-alcohol messages, this technique could for example be used on a ‘neural focus group’ to test the effectiveness of a video before it is released to the public.”

While still working on the topic of the reception of health media, Schupp and his lab is now looking forward to the next challenge: Studying how brains synchronise in people engaged collectively in a task.

The neuroscience of cooperation

At the Cluster of Excellence “Centre for the Advanced Study of Collective Behaviour”, Schupp is part of a research endeavour to assess neural underpinnings of collective failures and successes. Building on his success with establishing EEG as a measure of inter-subject correlation, Schupp will roll out mobile EEG technologies to determine if neural measures can identify effective group coordination.

Working with PhD students Karl-Phillip Flösch and Imhof, the researchers are developing methods to measuring brain waves of team mates engaged in games. They are also recruiting the help of computer scientists in the Centre for the Advanced Study of Collective Behaviour, such as visual analytics expert Daniel Keim, to help analyse the vast amounts of data that will come from measuring brain signals from a group of people simultaneously.

Ultimately, Schupp hopes that this approach will enable the prediction of successful or failed collective decisions based on a mechanistic understanding of group decision-making. “Examining inter-subject correlation with EEG is giving us an avenue to study group processes at a neural level,” says Schupp. “Can our brain show us when we are cooperating or when we are in competition? Answering this is our task for the next few years.”

About the study
The article “Strong health messages increase audience brain coupling” by Martin Imhof, Ralf Schmälzle, Britta Renner and Harald Schupp is published in NeuroImage with the doi 10.1016/j.neuroimage.2020.116527.