Thanks to high-tech, low-cost tracking devices, the study of wildlife movement is having its Big Data moment. But so far, only people with data science skills have been able to glean meaningful insights from this ‘golden age’ of tracking. A new system from the Max Planck Institute of Animal Behavior (MPI-AB) and the University of Konstanz is changing that. MoveApps is a platform that lets scientists and wildlife managers explore animal movement data—with little more than a device and a browser—to tackle real-world issues.

The system is linked to the database Movebank, developed by MPI-AB and hosted at the Max Planck Computing and Data Facility (MPCDF), which stores tracking data for over one thousand animal species worldwide. This tracking data can be pulled into MoveApps where owners of these data can then run complex analyses to find meaning in the numbers. A ranger could use the system to keep an eye on tracked animals in the park, creating a daily map showing where animals are located. Or, a conservation agency working with endangered species could receive an alert when a sudden clustering of GPS points suggests that an animal might have died. 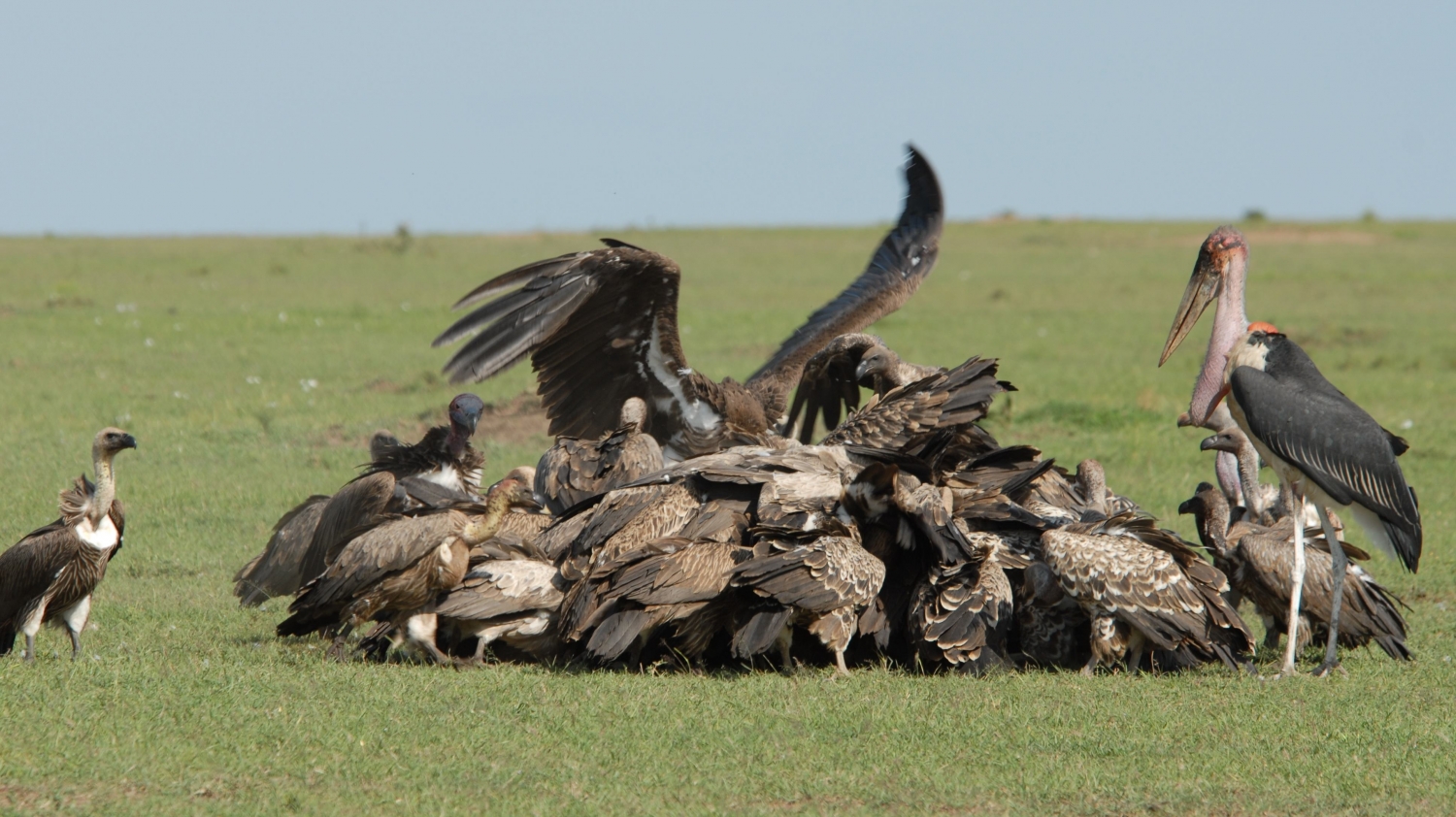 A vulturepile leads to sudden clustering of GPS points.

In a paper published in Movement Ecology, the authors detail how MoveApps unites programmers with data owners needing analytical tools on an open, serverless platform. While programmers develop tools that become openly available on the platform, users can browse these tools and run analyses with a few simple clicks on a user-friendly web-based interface.

The aim is to turn animal tracking Big Data towards solving big problems—by making it possible to analyze and make sense of movement data quickly and easily.

“You don’t need a data science degree, you don’t need to work at a university, you don’t need a software license or a big computer,” says first author Andrea Kölzsch, MoveApps project lead and postdoc at MPI-AB “You just need to have a question that can be answered with animal tracking data.”

Near real-time analysis for rapid response
When the North Carolina Zoo began tagging and tracking African vultures seven years ago, zoo staff would spend hours each day analyzing the GPS data to figure out if they needed to check on the birds. African vultures are the fastest declining group of birds globally and are particularly susceptible to poisoning by feeding on carcasses laced with pesticides. Because a poisoned carcass can kill over a hundred vultures in a matter of hours, zoo staff need to quickly identify feeding events, indicated by a clustering of GPS points from tagged birds.

“We used to manually bring GPS data into our tool, run an analysis for clustering of birds, and then decide ourselves if these were real feeding events,” says collaborator Corinne Kendall from North Carolina Zoo who leads the vulture project. “It was a two-hour job every day.”

MoveApps has turned this two-hour workflow into an email automatically delivered to staff every morning. Once a day, data from vulture tags automatically stream into Movebank and then into MoveApps for immediate analysis. Staff receive an email with locations of bird clusters and can launch a rapid response in near real-time. 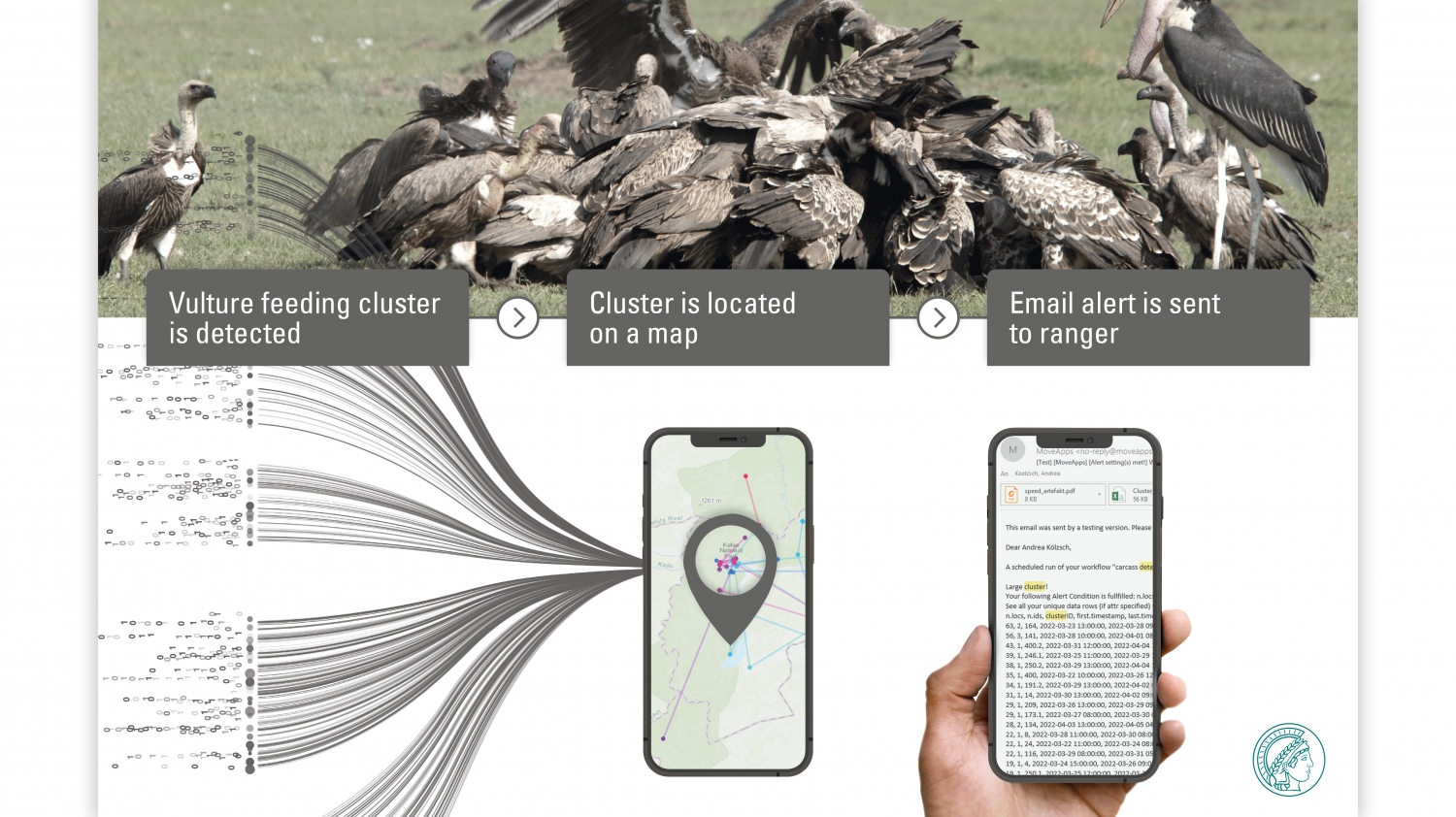 MoveApps has automated the manual effort of North Caroline Zoo staff. A simple email now alerts staff based on data analysed in near real-time.

Like all tools on the open-source platform, the clustering analysis tool is free for anybody to use, and is already being adapted by conservationists with similar needs. Further, it has been seamlessly connected to Earth Ranger—a real-time data visualization and analysis software used by protected area managers, ecologists, and biologists across more than 50 countries—substantially broadening its impact and making it part of an operational interface at the forefront of protecting wildlife and their habitats.

Says Kendall: “Not only has MoveApps improved analysis of our tracking data, it has enabled real-time investigation into vulture behavior and conservation. Systems like MoveApps will be a critical extension as we see telemetry data informing real world applications.”

“Unlimited” possibilities for analysis
MoveApps is built of analytical modules, called Apps, that access and analyze tracking data. Like Lego blocks, they can be clicked together to form workflows. For example, a workflow might consist of one block to draw the data, one block to clean the data, and one block to visualize it on a map.

Technically the analyses people can create are unlimited

For the most part, Apps are coded in R—the preferred software for movement ecologists, because it offers open source code for analysis of complex behavioral datasets. But R has been a major barrier preventing some data owners from analyzing their data, because it requires command line programming. “ Most scientific or conservation management groups have, if at all, one dedicated data scientist, always overworked, making data analysis very slow,” says Kölzsch.

MoveApps removes the need for coding by allowing data owners to reach developers who can make tools that are then available to the whole community. With Apps in the system, users simply select and click to put that code to work. And because the code is open, the community can in turn help to improve the code.

In addition, these workflows can be published, which provides recognition for the programmers and truly reproducible analytics.

"Publishing software source code and its documentation together with the data in Movebank closes a gap in making research results transparent and reproducible,” says co-author Gabriel Schneider from the Communication, Information, Media Centre at the University of Konstanz, who developed MoveApp’s open code publishing. “By describing every workflow with rich metadata, users will be able to understand and use it in the years to come." 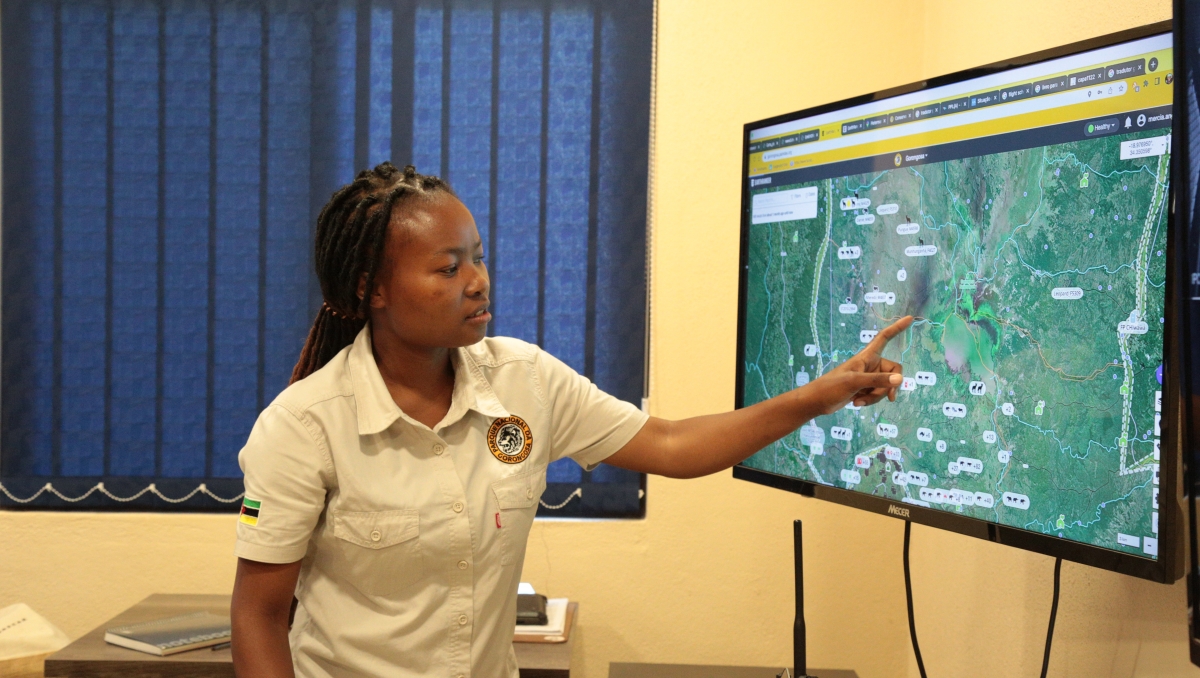 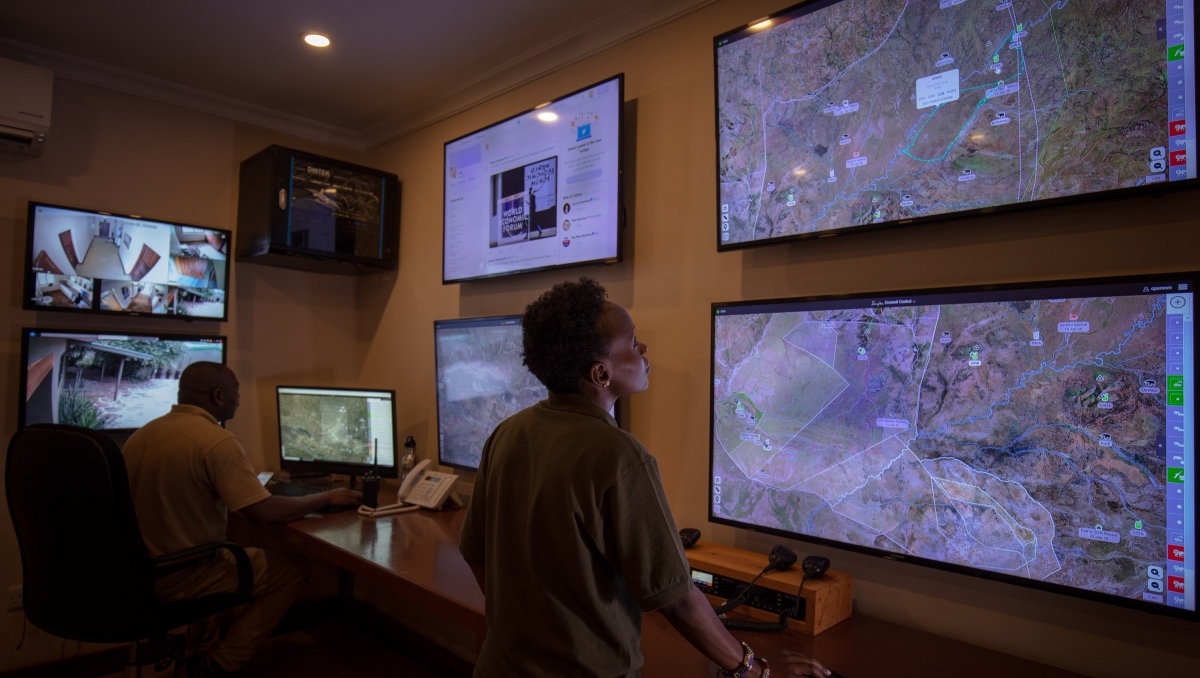 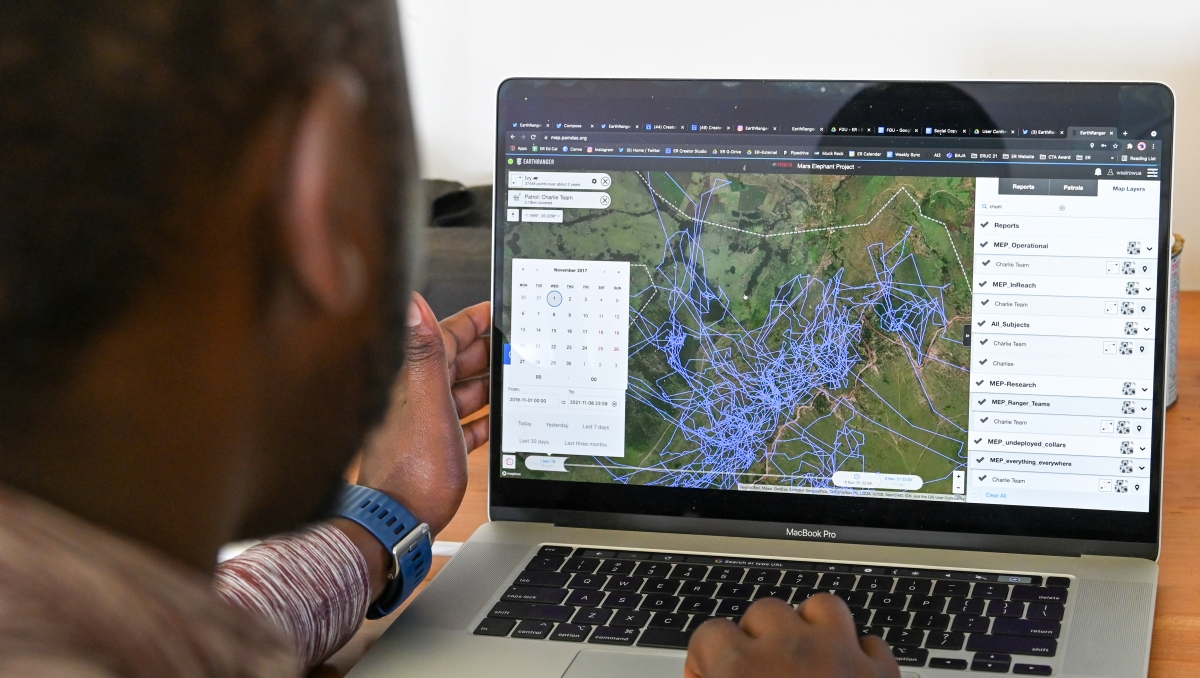 A cloud-native computing architecture
According to the authors, MoveApps is the most inclusive, sustainable, and secure platform for analysis of animal movement, thanks in part to its serverless, cloud-native computing architecture. All data are stored and analyzed on cloud-based infrastructure, which means that powerful analyses can be done in seconds without users needing a fast computer.

“MoveApps is leading the way towards a more democratic, emancipated and creative future, one in which science is open to everybody regardless if they can afford the necessary hardware and software,” says Kölzsch.

On the cloud, Apps are implemented as independent containers, which allows them to run more efficiently and minimizes the risk that an error in one will cascade to others in the workflow. MoveApps is currently hosted on the MPCDF High Performance Computing (HPC) Cloud and is free for all users.

But MoveApps was built for flexibility: as demand might increase in the future or the request for faster processing of workflows becomes critical, MoveApps can grow within MPCDF as well as potentially take advantage of public clouds offered by commercial partners.

“By decoupling MoveApps from static infrastructure, we built it to be efficient and scalable for the long term,” says Brian Standley who is supporting the project at MPCDF.