Collective behaviour researchers have applied a new tool for analysing the movement of football players that goes beyond looking at individual athletes to capturing how the team operates as a whole. The tool, which comes from statistical physics but has never been used for sports analysis, finds clear differences in collective dynamics between winning and losing teams and can even predict the market value of players. The detailed results can be found in the online edition of the scientific journal “Chaos, Solitons & Fractals”.


Published by an interdisciplinary research team, from the Research Center in Sports Sciences, Health Sciences and Human Development in Portugal, the Cluster of Excellence “Centre for the Advanced Study of Collective Behaviour” at the University of Konstanz and the co-located Max Planck Institute of Animal Behaviour in Germany, the study can aid football teams in identifying talent and can give extra value for assessment for coaching staff.

With the easing of restrictions from COVID-19, football fans can finally return to their television sets to watch their favourite teams as tournaments around the world resume – albeit in empty stadiums. And the question, as always, is which team will win?

The field of sports analysis has given greater power than ever before to answering that question. In recent years, availability of sophisticated technologies and the ‘big-data’ revolution have allowed information to be captured and analysed at unprecedented scale. These data include metrics such as number of goals, passes, and shots in games as well as the daily nutrition, heartrate, general strength and stamina for players.

Astonishingly, however, most previously studied attributes in football are all centred around the individual player. “While this can be sufficient for individual sports, such as running, it lacks the vital information about how teams operate as a whole”, says Rui Marcelino from Research Center in Sports Sciences, Health Sciences and Human Development (CIDESD), Portugal, who led the study published in the journal Chaos, Solitons & Fractals.

Conducted by an international research team comprising sport scientists from Portugal and collective behaviour scientists from Germany, the new study presents a novel, system approach to analysing football games. “In this work we were able to develop a method that captures the unique ‘fingerprint’ of the players, as far as their movement on the field is concerned”, says first author Marcelino. “This individual signature could be a valuable tool in supporting decision making by coaches in practical and real game scenarios”. 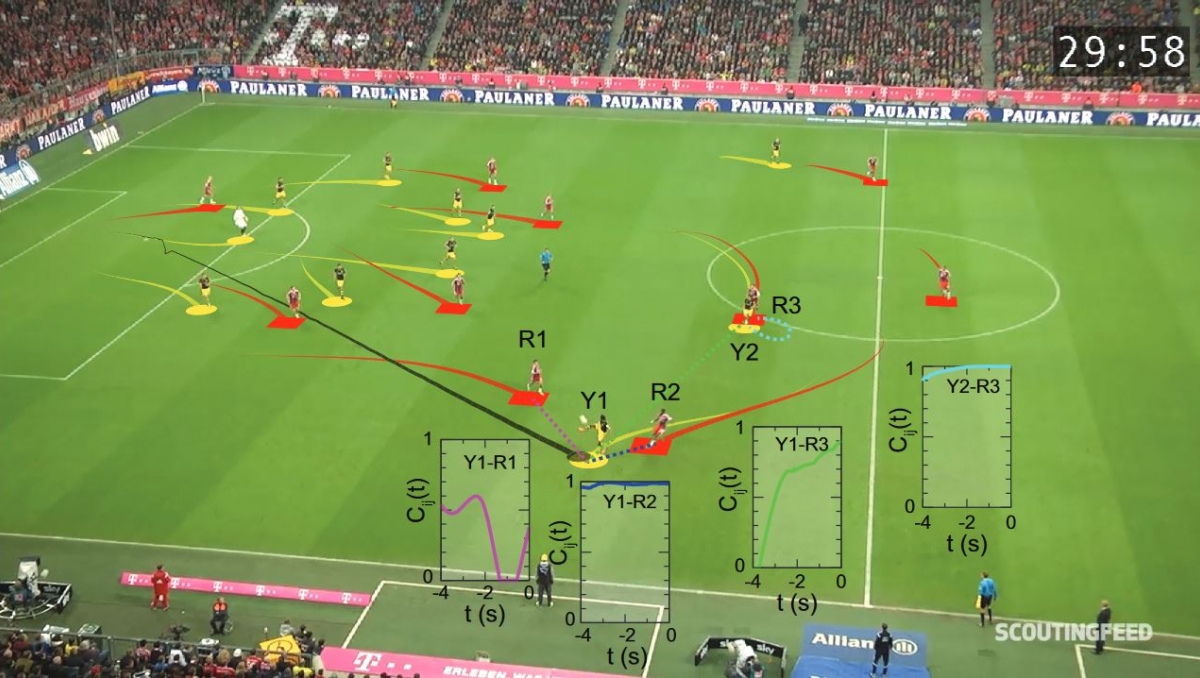 Analysing the movement of football players with a collective behaviour approach captures how the team operates as a whole. This illustration shows the study’s new method for quantifying the similarities in the player's motion. Players’ (with red and yellow for the two teams) and the ball’s tracks (black) are visualized over a snapshot from the video of a match played in a German Bundesliga season. Insets show examples of the new metric – HCS (highly correlated segments – for four pairs of players (indicated by dashed links between the selected players). Highly correlated motion segments can be seen between players Y1-R2 (blue) and Y2-R3 (cyan). For instance, Y1-R2 are from two different teams, and it is possible to see the two players on the pitch, their trajectories, and in the plot how correlated they were.
© Image: Centre for the Advanced Study of Collective Behaviour, University of Konstanz
Hide text

The novel method combines advances in automatic player identification and tracking with group behaviour analyses from the field of collective behaviour. “Our field had a paradigm shift from focusing on the individual to the collective”, says Iain Couzin, co-author on the paper who leads the Cluster of Excellence “Centre for the Advanced Study of Collective Behaviour” at the University of Konstanz and the Department of Collective Behaviour at the co-located Max Planck Institute of Animal Behavior, “so we have expertise in analysing collective movements, such as what we see in football”.

The scientists analysed five full matches played by nine teams from a German Bundesliga season. They employed a tool borrowed from statistical physics, the directional correlation techniques, that “describes how similar the motion of the players is to each other in terms of their directions”, explains Mate Nagy, the head of the MTA-ELTE Collective Behaviour Research Group, Hungary, and senior author on the study. “For example, if two players are running in similar directions and then both turn 30 degrees to the left, their motion patterns are very similar even if they started that turn at slightly different times”. From this the scientists created a metric – the HCS (highly correlated segments) – which reveals how players perform together within their group and against the opponent players. So rather than analysing only individual performance metrics, for example how much or how fast a player runs in a game, the study examined cooperation and coordination among players in order to reveal collective strategies associated with team performance.

Researchers include scientists from the Research Center in Sports Sciences, Health Sciences and Human Development in Portugal, the Cluster of Excellence “Centre for the Advanced Study of Collective Behaviour” at the University of Konstanz and the co-located Max Planck Institute of Animal Behavior in Germany.

“We show how attackers and defenders need to play in inherently different ways, where attackers need to move in uncorrelated ‘surprising’ ways to be successful, perhaps to make it harder for the opposing team to track them down”, says Marcelino, “while defenders need to be very correlated and organized as a unit, demanding a much different type of talent”. HCS also proves to be robust and reliable for player evaluation as the study found a relationship between the metric and the market value of the players.

This study can have broad implications, both for the scientific community and the sports industry. The metric introduced in the study can aid teams in identifying talent and can give extra value for assessment for coaching staff. Scientifically, the findings show that team sports can be considered as an example of human collective behaviour and studied accordingly. “When we study collective behaviour, we often aim for tractable systems that are more easy to analyse”, says Guy Amichay, a PhD student at the Max Planck Institute of Animal Behavior and co-author on the study. “Human collective behaviour is of course of great interest, but often the mechanisms underlying collective outcomes are elusive. By working in a framework of competitive games, with known underlying rules, we can begin to overcome this”.