A biologist from the University of Konstanz, along with an international group of re-searchers, calls for extending the natural adaptive capacity of corals through nature-based approaches.

Coral reefs are the rainforests of the seas, and 30 percent of all marine biodiversity depends on them. In economic terms, they support the livelihoods of around a billion people around the globe. At the same time, coral reef ecosystems are severely threatened by climate change. In an article published in the current issue of the online journal Nature Reviews Earth & Environment, Professor Christian Voolstra from the University of Konstanz, along with an international group of experts, describes how to extend and harvest natural adaptive processes to increase the resilience of corals in order to increase the resilience of the reef ecosystems they build. The researchers call for implementing nature-based approaches and developing associated methods to extend the natural heat resilience of corals. The objective in a way is to provide an arsenal of methods that can help corals help themselves.

The 1.5-degree climate warming target is not enough
The historically close adaptation of corals to their surrounding climate is their Achilles heel under climate change. Even the goal of limiting global temperature rise to 1.5 degrees is not enough to save coral reefs. This is because corals are adapted to their surroundings to such a remarkable degree that even a small rise in temperatures can detrimentally impact them. This becomes broadly evident in coral bleaching, which is symptomatic and indicative of a dysfunctional symbiosis between corals and their essential photosynthetic algae. “We have to do something,” the researchers involved in the study demand with conviction. 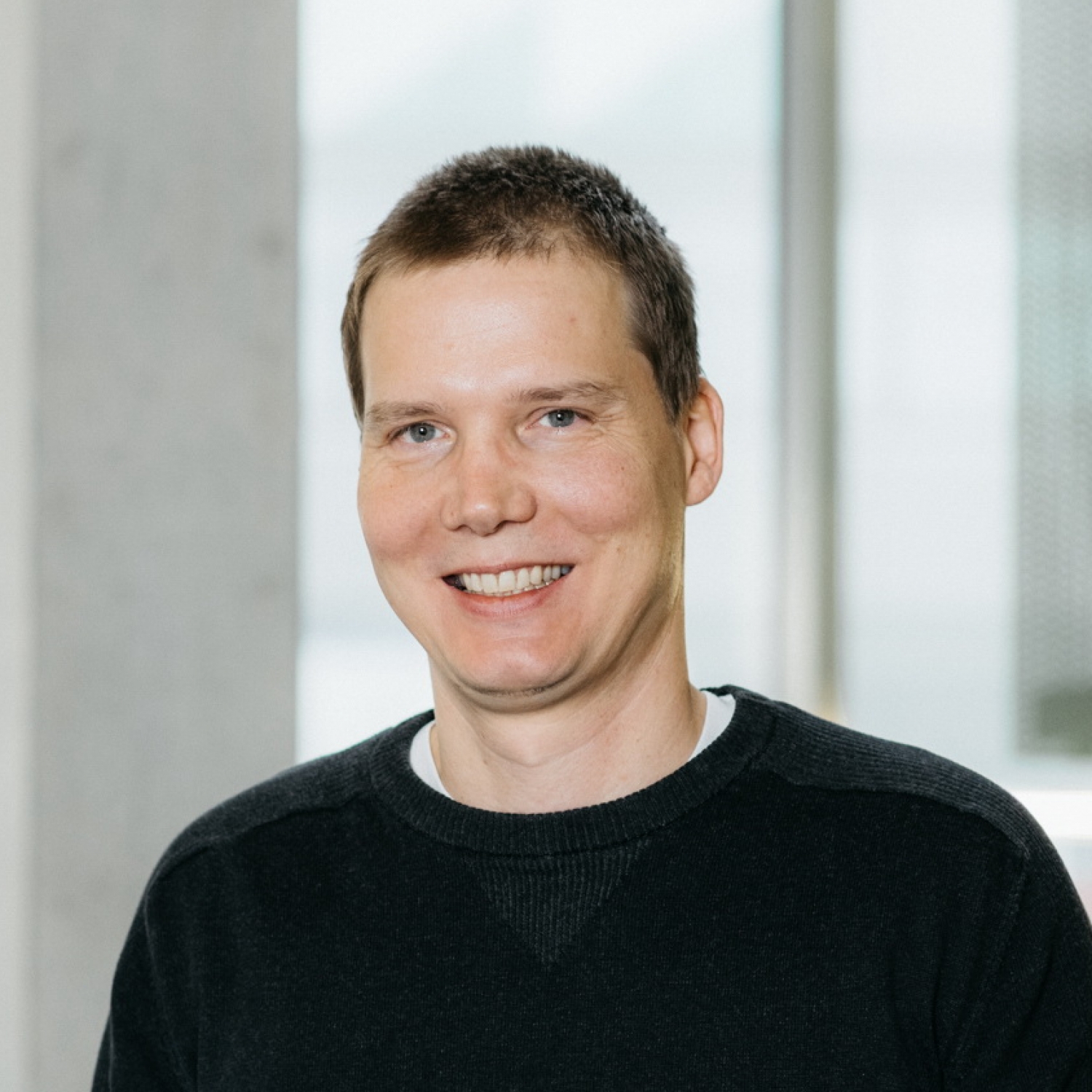 "We call for an approach that follows a “nature does it best” philosophy. What solutions have corals developed to increase their stress tolerance, how do we study them, and how can we best use them?"

Restoring coral reefs by means of fragmenting corals to grow new colonies has not proven very successful, because the same corals are used that bleached before. Thus, it is only a matter of time before these corals would bleach again during a subsequent heat wave and eventually die. Therefore, the researchers are concentrating on methods that can improve the survival of restored coral.

Resistant and less resistant colonies
One option is to select better source material. Not all corals demonstrate the same level of sensitivity. For example, there are reefs with extremely resistant corals that retain their properties when used as material for restoring colonies. To identify such coral species, Voolstra’s research group developed the rapid test CBASS (“Coral Bleaching Automated Stress System”) to determine the heat resistance of corals. Voolstra recently applied this test during field work in the Red Sea. “We observed a large natural variation of very resistant and very susceptible colonies even within the same reef,” says Voolstra.

Getting coral offspring used to harsher environmental conditions
Another approach to optimize restoration is making the corals more resistant through conditioning. The method of “environmental hardening” introduces very young corals, or coral larvae, to harsher environmental conditions by gradually applying a low level of stress. As has already been shown, these “primed” corals are better equipped to deal with real-world stress situations. One branch of research specifically focuses on determining those environmental conditions and sites in which corals have already learned to live under more extreme conditions. Colonies near the coast, for example, are exposed to strong temperature fluctuations, as water in such locations is warmer during the day and colder at night. This makes the corals more resilient.

Furthermore, as corals live in symbiosis with their associated algae as so-called holobionts, this symbiosis can be used to increase the stress tolerance of the corals. For instance, there are also differences in the stress resistance among different algal species associated with corals. In their early development, the free-swimming coral larvae are usually not yet associated with the algae. This provides an opportunity to make only certain algae species available to corals when they are still larvae. Research shows that at this stage, corals more easily engage and associate with resistant algae. In fact, continuous heat stress might even be necessary to maintain the symbiosis with such robust and non-native algal species. 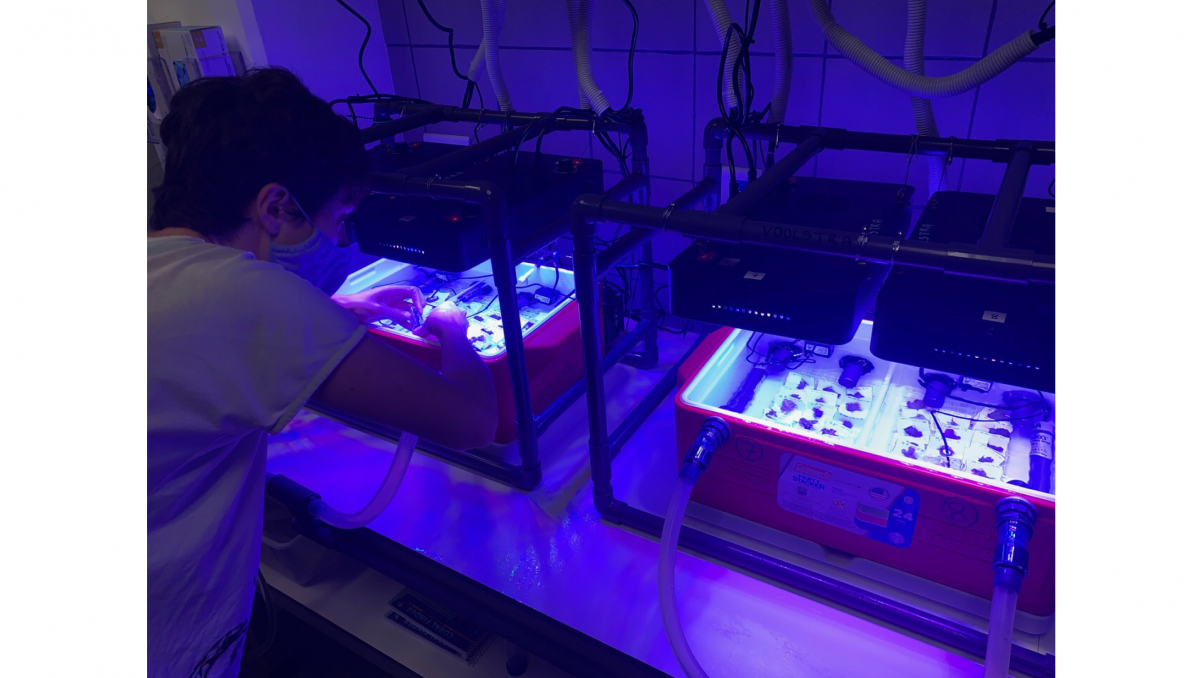 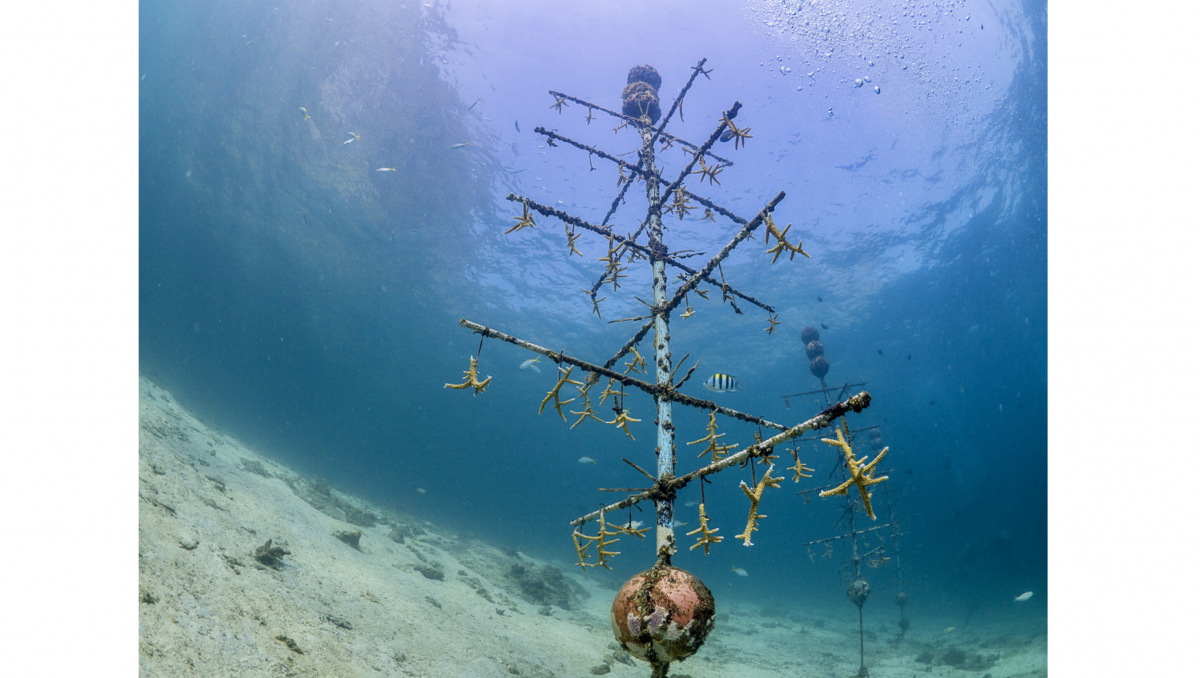 Coral restoration by means of fragmentation-based propagation. For this, typically coral fragments from mother colonies are attached to an artificial structure or substrate to grow to a certain size, after which they are replanted into the reef site targeted for restoration.
© Anna Roik
2 of 7
Hide text 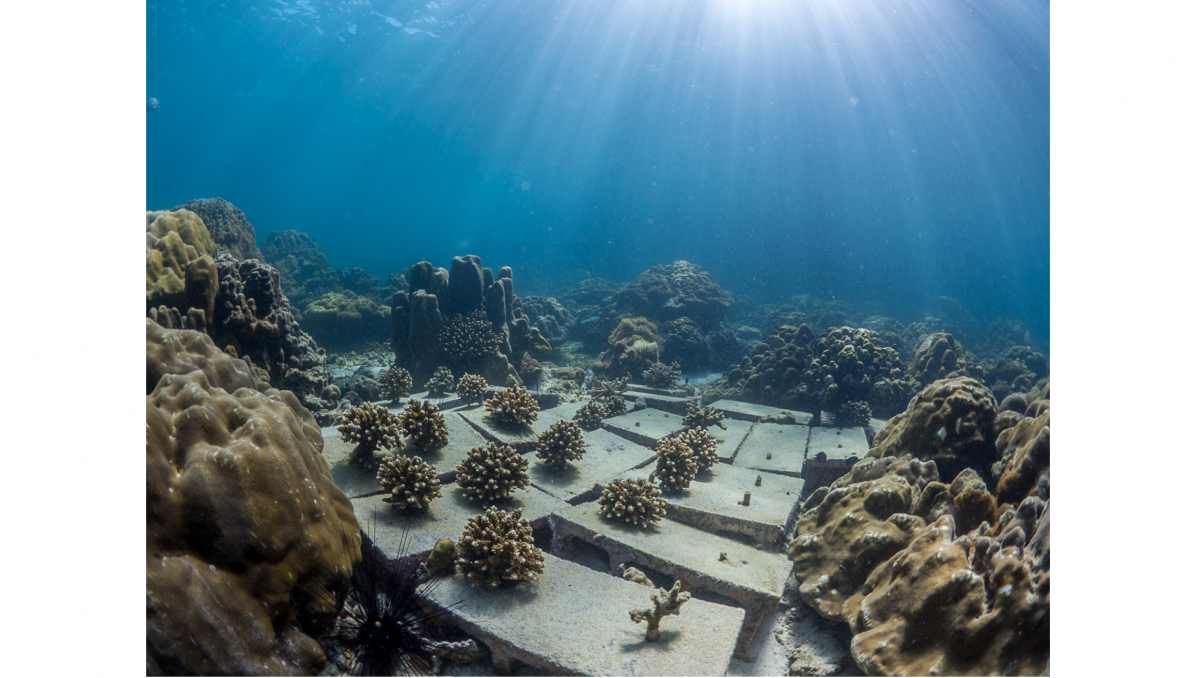 Coral restoration by means of nurseries-based coral growing. For this, typically coral larvae are allowed to settle to an artificial structure or substrate to grow to a certain size in nurseries in a benign environment, after which they can be transplanted to the reef site targeted for restoration.
© Anna Roik
3 of 7
Hide text 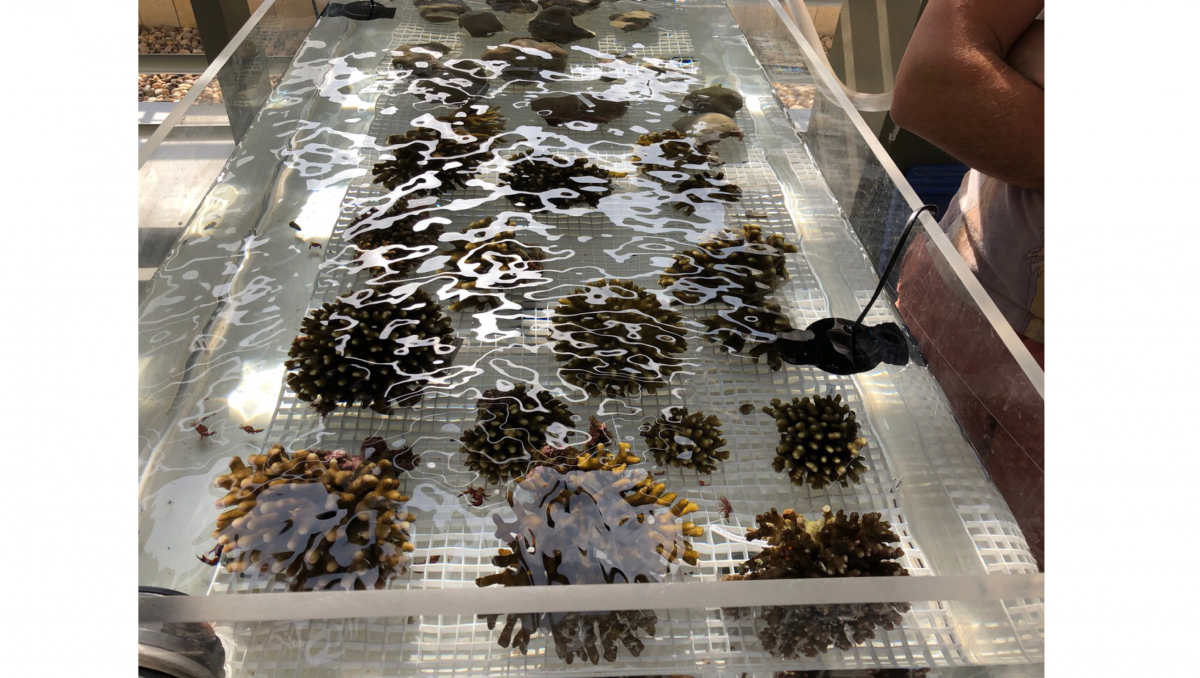 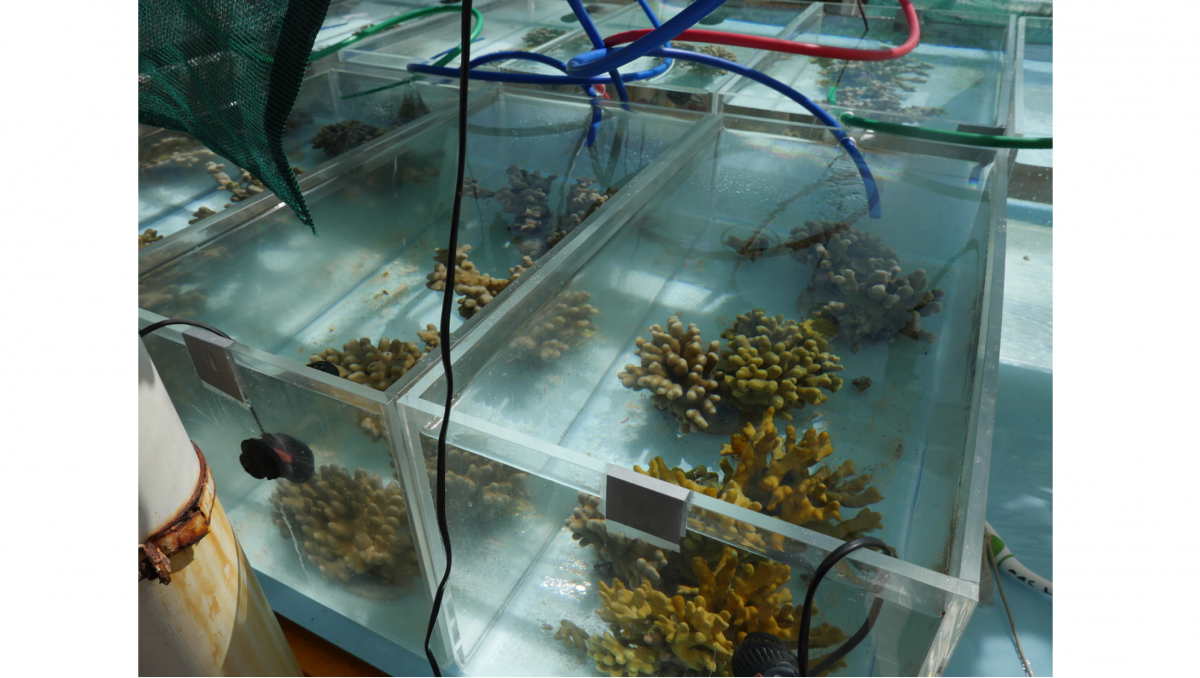 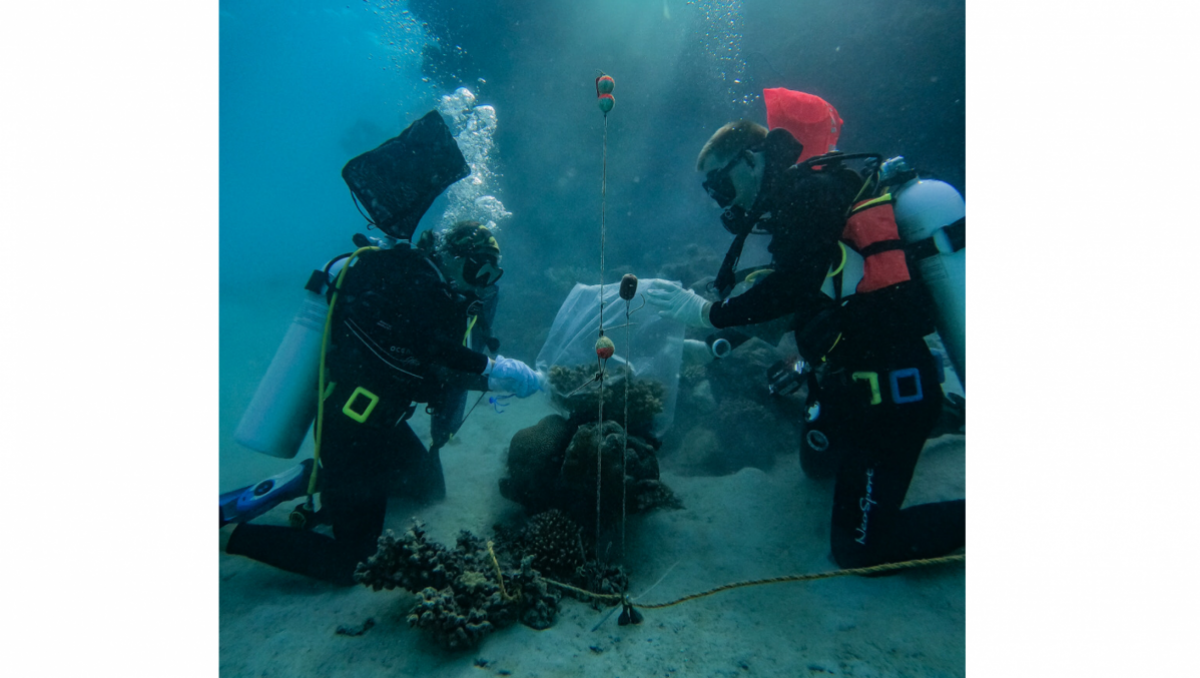 Coral restoration by means of microbial therapy. Shown are Professors Raquel Peixo-to (KAUST) and Christian Voolstra (University of Konstanz) applying a probiotic cocktail consisting of beneficial bacteria isolated from healthy and resilient coral colonies of the same species, to a coral colony to increase its stress tolerance.
© Helena Villela
6 of 7
Hide text 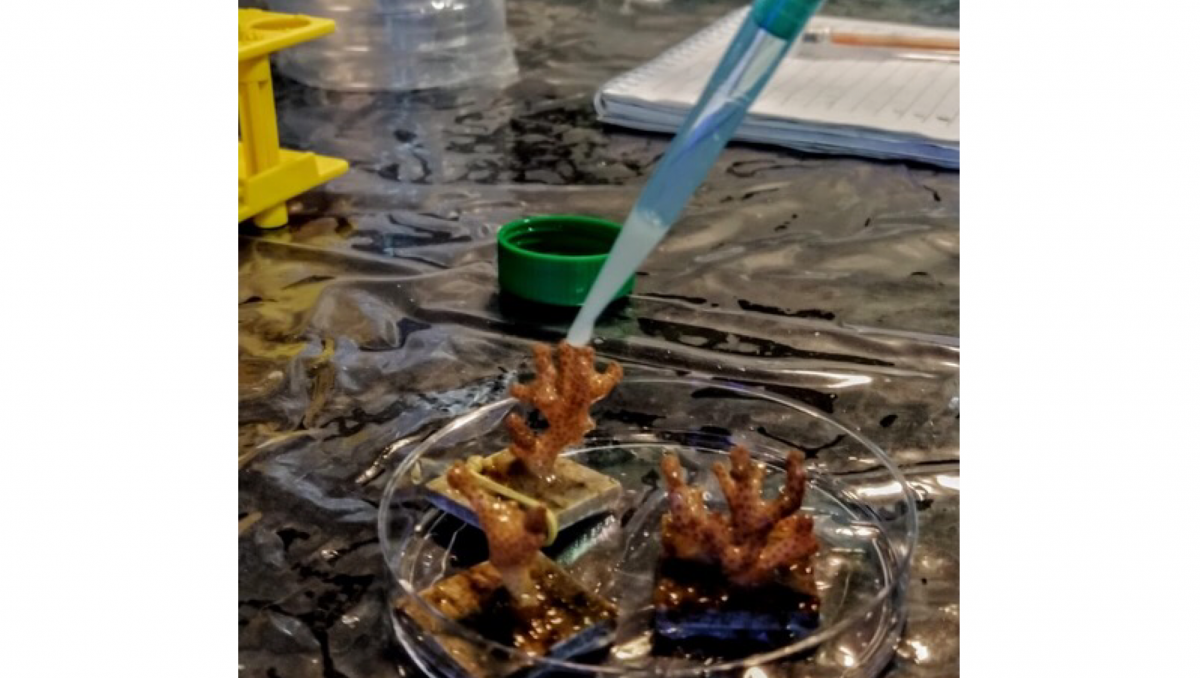 Microbiome transplantation from resistant to susceptible corals
Ultimately, it is possible to transfer mutualistic bacteria from a resilient to a susceptible coral to optimize heat tolerance. This can be accomplished either by transplanting the microbiome from healthier, stress-resistant corals onto susceptible ones, or by administering a probiotic cocktail derived from a mix of cultured, beneficial bacteria extracted from particularly resistant colonies. In the recently published study “Coral microbiome manipulation elicits metabolic and genetic restructuring to mitigate heat stress and evade mortality”, in which Voolstra also participated, researchers were able to show that applying a probiotic treatment reduced the mortality of corals under acute heat stress by 40 percent in the long term.

It is important that in this form of manipulation – in contrast to genetic modifications – no artificial or foreign genetic material is added. Voolstra expressed his opposition to genetic manipulation to save reefs: “It is very difficult to predict the effects of foreign genetic material in complex ecosystems, particularly in microorganisms that have extremely short reproduction times and are therefore able to spread and evolve quickly.”

In a second part, the published review also emphasizes the importance of standardizing procedures in order to make them comparable and transparent. A global database with standardized experiments and results is already being developed. The plan is to analyze such ‘big data’ using artificial intelligence approaches to determine the factors that are indicative of the type and degree of suggested interventions.

“Unfortunately, it is too late for nature to heal itself. Our objective is to make sure enough coral survive to assist in the long-term recovery of reef ecosystems, after climate neutrality is reached. It is up to our generation to identify the arsenal of nature-based adaptive approaches available and intervene accordingly where indicated.” 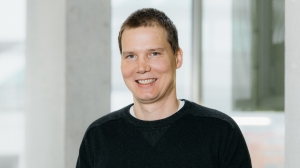 Professor Christian Voolstra from the Department of Biology at the University of Konstanz and an international group of experts provide an overview of natural processes that are suitable for enhancing the resilience of corals.