No time to nap in nature

Sleep study on a troop of wild baboons reveals that sacrificing sleep to meet pressing demands is common—and might even be part of our evolutionary history (Adapted version of the original press release from the Max Planck Institute of Animal Behavior).

The first study ever to examine sleeping behavior in a wild group of primates has challenged a central tenet of sleep science: that we must make up for lost sleep. Even after sleeping poorly, wild baboons still spent time on other priorities, such as socializing with group-mates or looking out for predators, rather than catching up on lost sleep. The team of scientists from the Max Planck Institute of Animal Behavior, the Centre for the Advanced Study of Collective Behaviour at the University of Konstanz and the University of California, Davis used non-invasive technology to monitor sleep patterns across almost an entire group of individuals at once. The findings lay bare the competing priorities that suppress sleep homeostasis in wild primate societies  raising the possibility that humans have navigated sleep deprivation throughout our evolutionary history.

Studies of sleep have revealed that animals of different species, from honey bees to humans, put aside a portion of each day to rest. But, with some notable exceptions, all sleep studies share the same thing in common: they were conducted on animals in the laboratory. In laboratory settings, animals perform the phenomenon known as sleep homeostasis—an animal with an accumulated sleep debt will later sleep longer or more deeply than usual. Sleep homeostasis has long been considered a key criterion in the very definition of sleep.

But the new study published in eLife demonstrates that animals in the wild face a slew of ecological and social demands that can disrupt sleep homeostasis. Specifically, baboons sacrificed sleep to stay awake in new environments and to remain close to their group-mates, regardless of how much they had slept the prior night or how much they had exerted themselves the preceding day.

The study was led by PhD student Carter Loftus from the University of California, Davis.

The competing priorities that lead humans to accumulate sleep debt might seem unique to a modern, industrialized society like ours. But our findings demonstrate that non-human primates also sacrifice sleep, even when it might be unhealthy to do so, to partake in other activities. The tradeoff between sleep and other pressing demands on our time is, therefore, one that we have likely been navigating throughout our evolution.

“Baboons are highly vulnerable to night-time predation and their fitness depends on maintaining strong social bonds. Trading off sleep to maintain alertness in novel, risky environments and to remain close to group-mates during the night may therefore represent an essential adaptation,” Carter Loftus adds.

To identify when animals were sleeping and when they were awake, the team collected high resolution movement data from GPS trackers and accelerometers attached to almost all baboons in a troop. As the first study to investigate collective sleeping behavior in wild primates, the findings bring to light the unknown social costs and benefits associated with sleep in animal societies. Baboons experienced shorter, more fragmented sleep when sleeping near more of their group-mates. However, they also synchronized periods of nocturnal awakening with nearby individuals, suggesting that baboons may have actually been interacting with each other and strengthening their social bonds over night. 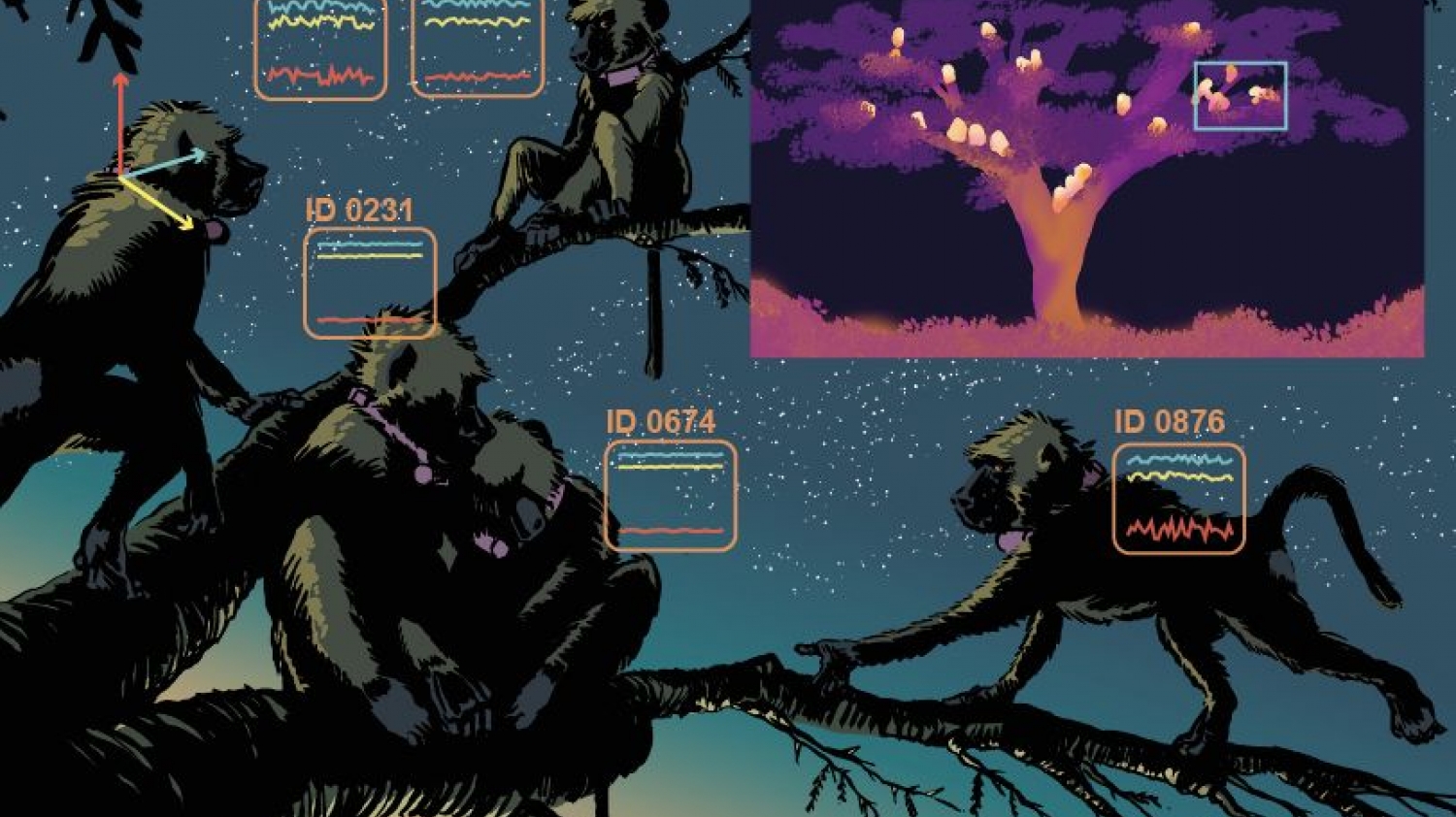 © Mike Costelloe for the Max Planck Institute of Animal Behavior

Accelerometers are deployed to non-invasively measure sleep behavior in a group of wild baboons. Mounted inside collars, the accelerometers monitor and record fine-scale movements of baboons along the x- (yellow), y- (blue), and z-axes (red). An algorithm then assesses the amount of movement in the three axes within a given time period, and classifies the behavior during that period as sleep or waking. To confirm that the algorithm’s classification of sleep and waking is correct, baboons are also observed in their sleep site using infrared video recordings (inset). The method makes it possible to monitor the sleep of an entire group of wild baboons simultaneously and continuously. By doing so, the study finds that animals in the wild face ecological and social demands that can disrupt sleep homeostasis.

Meg Crofoot, director of the Department for the Ecology of Animal Societies at the Max Planck Institute of Animal Behavior and Professor at the University of Konstanz, is the senior author of this study and was the first to apply GPS tracking and accelerometry technology to study social behavior in primate societies.

“We discovered that sleep is a collective behavior in baboon groups. Group-mates were highly coordinated in their patterns of awakening during the night, which in turn led to shorter and more fragmented sleep. Our results show that these highly gregarious animals are balancing their physiological need for sleep with the social pressures of group living,” Meg Crofoot explains.

Working at the at the Mpala Research Centre in Kenya, the team fitted 26 wild baboons with GPS and accelerometry collars. In contrast to well-established methods used in sleep studies, which typically involve surgically implanting electrodes to measure brain activity via electroencephalography, the technique used in the present study  represents a non-invasive alternative that can identify periods of sleep and wakefulness in wild, free ranging animals. The GPS trackers provided information on where the animals moved. This enabled the researchers to answer questions such as: how far the animals had traveled during the day, in which sleep site they slept, and with whom they slept. The accelerometers, which are similar to smartwatch and Fitbit technology, gave ultra high-resolution information on body movements. By applying an algorithm adapted from studies of human sleep, the researchers used accelerometry data to determine when the baboons were asleep or when they were awake. They then used thermal video recordings of sleeping baboons to validate their findings. 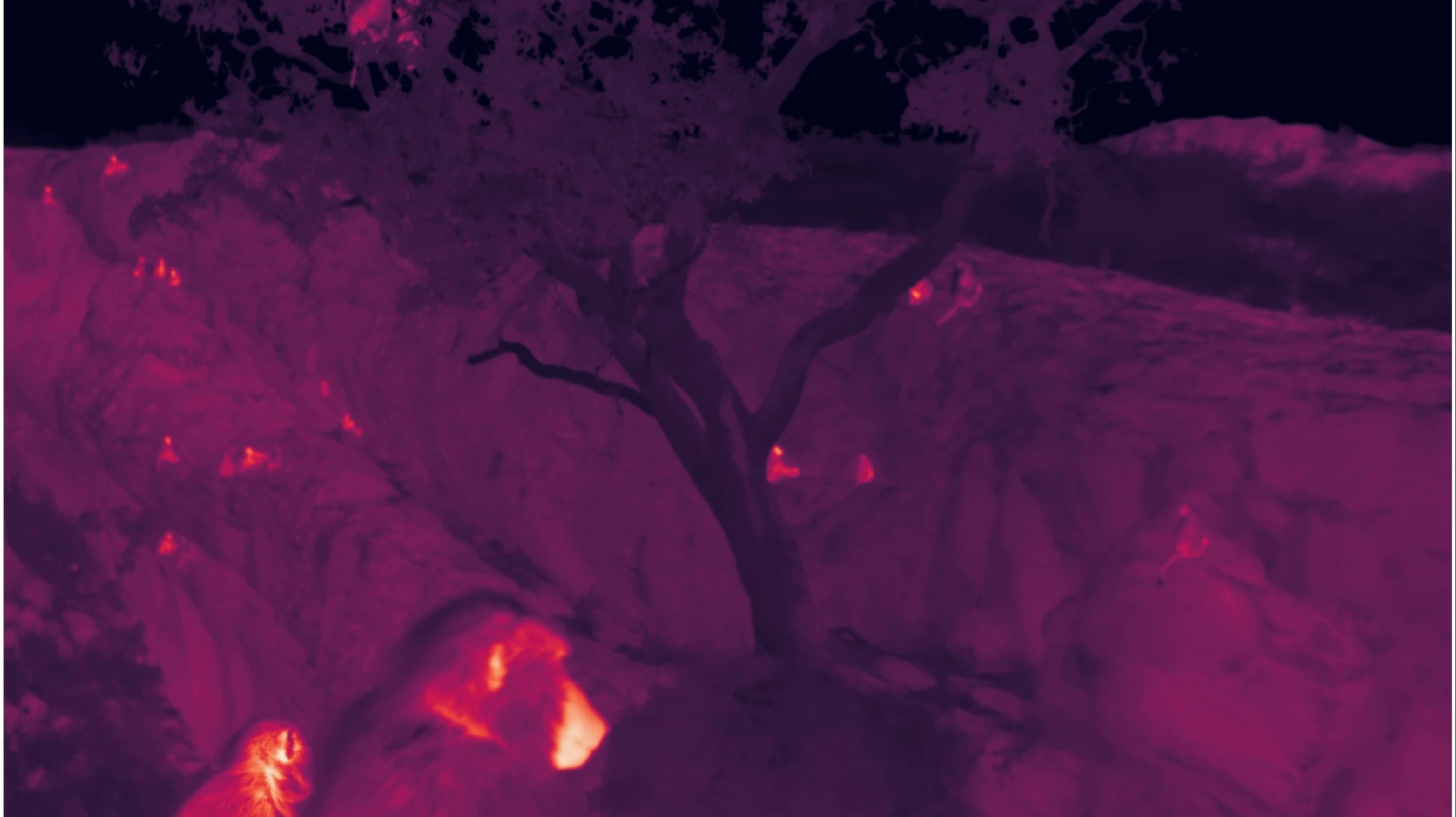 Thermal video recordings of baboons in their natural habitat were used to validate when animals were sleeping and when they were awake.

This study opens an exciting new frontier of scientific inquiry into the dynamics of sleep.

“The accelerometry-based method can be easily and cheaply integrated into studies tracking animals in their natural habitats, allowing us to massively expand what we know about sleep across a range of species. In the same way, the technique can be applied to many individuals at the same time, paving the way for understanding how sleeping in groups shapes the structures of animal societies.”

Studie: Ecological and social pressures interfere with homeostatic sleep regulation in the wild