Insects are the world’s smallest flying migrants, but they can maintain perfectly straight flight paths even in unfavorable wind conditions, according to a new study from the Max Planck Institute of Animal Behavior (MPI-AB) and the University of Konstanz. Researchers radio tracked migrating hawkmoths for up to 80 kilometers—the longest distance that any insect has been continuously monitored in the wild.

By closely following individuals during migration, the world-first study unlocks a century-old mystery of what insects do over their long-range journeys. The study, published in Science, confirms that hawkmoths can accurately maintain straight trajectories over long distances, employing sophisticated strategies to counter and correct for unfavorable wind conditions. The findings reveal that insects are capable of accurate navigation, implying that an internal compass guides them on their long journeys.

With trillions of individuals migrating every year, insects are some of the most common migrating animals on Earth. They include species of renown, such as the monarch butterfly, as well as species of enormous societal and environmental importance, such as locusts, mosquitos, and bees. But even though insect migrants far outnumber better-known migrants, such as birds or mammals, their migration is the least understood form of long-range animal movement.

The problem, for the most part, has been methodological. “Studying insects on the move is a formidable challenge,” says first author Myles Menz, who conducted the research at MPI-AB and is now a lecturer at James Cook University in Australia. “They’re usually too numerous to mark and find again, and too small to carry tracking devices.”

Much of what we know about insect migration has come from studies that sample insects at a single moment in time, such as through radar or direct observation, which has left vast blank spots in our knowledge.

“Understanding what insects do during migration, and how they respond to weather, is a last frontier in migration science.”

The current study, which followed radio-tagged individuals in a light aircraft, is the first to continuously study nocturnal migrating insects in the wild and represents the longest distance over which any insect has been continuously tracked in the field. The team, which includes researchers from the MPI-AB and University of Konstanz in Germany and the University of Exeter in the UK, focused on the death’s-head hawkmoth—a large, nocturnal migrant that travels up to 4000 kilometers between Europe and Africa every year. Like many insects, the species is a multi-generational migrant, which means that no individual knows the entire route. 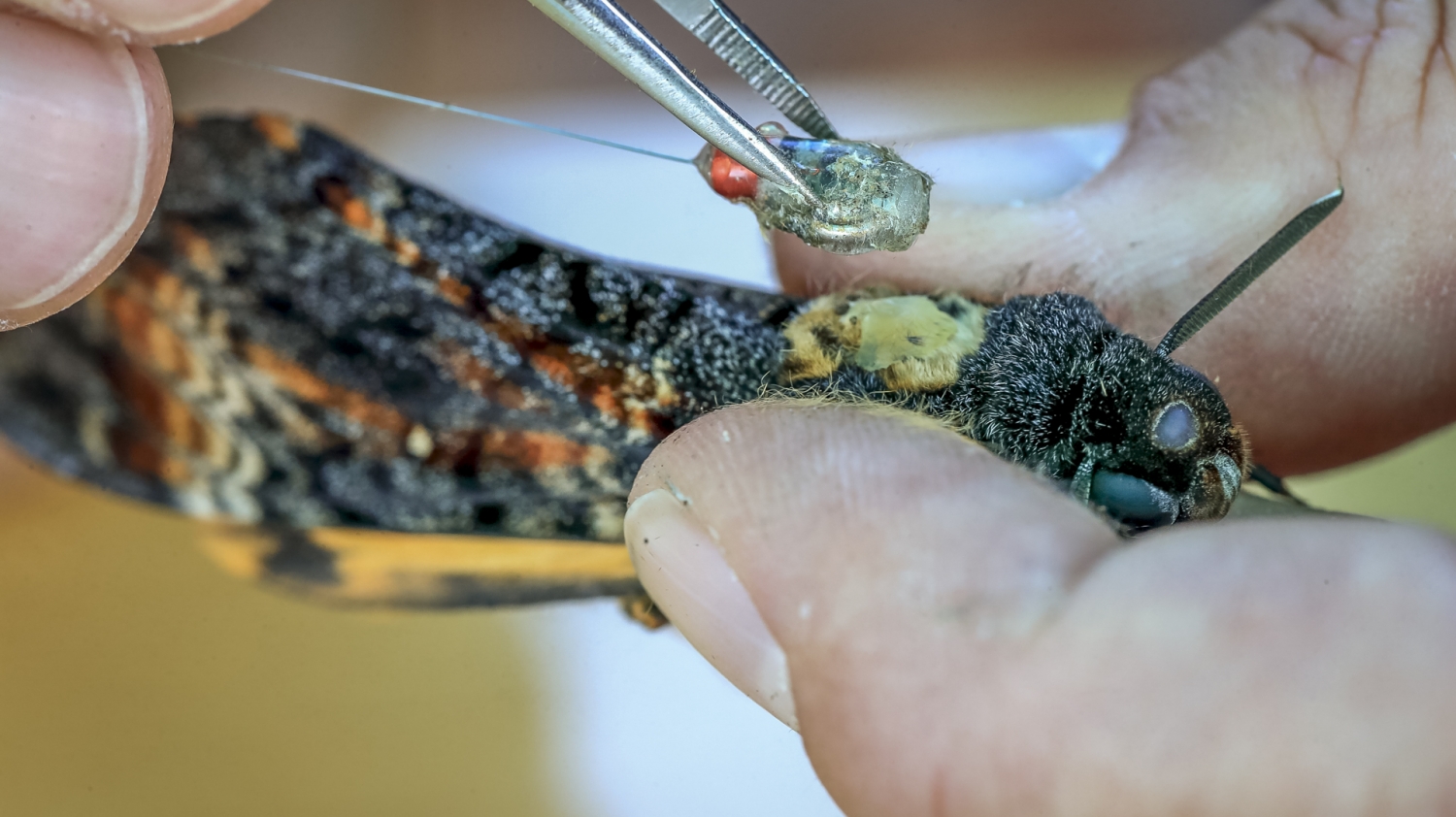 The moths are extremely large for flying insects, weighing up to 3.5 g, and were fixed with tiny radio tags weighing 0.2 grams—less than 15% of adults’ body weight.

At the MPI-AB in Konstanz, Germany, the team reared caterpillars until adulthood in the laboratory to ensure that individuals were naïve. When moths emerged as adults, they were fixed with radio tags weighing 0.2 grams—less than 15% of adults’ body weight. “The moths would probably eat more weight than that in a night, so these tags are extremely light for the insects,” says Menz.

The researchers released the tagged moths and waited for flight to begin, after which they chose a single individual to follow at a time. The team followed 14 moths each for up to 80 kilometers or 4 hours—a stretch long enough to be considered migratory flight—using antennas mounted on a Cessna airplane to detect precise locations every five to 15 minutes. Insects were followed in the south-south-west direction from Konstanz into the Alps, which follows the route taken by hawkmoths towards the Mediterranean and Northwest Africa.

After tagging, moths were released in Konstanz, Germany, and followed in a light aircraft for up to 80 kilometers into the Alps. Copyright: Myles Menz, Max Planck Institute of Animal Behavior

Due to practical constraints of flying in an aircraft, the scientists tracked moths continuously until the insects stopped on route. “When you’re in an airplane, it becomes extremely difficult to wait for the insects to begin migrating again because you would have to be in the air when this happens, which could be anytime in the night,” says senior author Martin Wikelski, a movement ecologist from the MPI-AB and University of Konstanz, who piloted the plane during the study.

The results show that moths maintained perfectly straight trajectories for long distances during flight. This was not because they waited for favorable tailwinds. Rather, they employed a range of flight strategies to buffer against prevailing winds, allowing them to hold their course throughout the night. When winds were favorable, they flew high and slow, allowing the air to carry them. But during harsh headwinds or cross winds, they flew low to the ground and increased speed to keep control of their path.

“For years it was assumed that insect migration was mostly about getting blown around. But we show that insects are capable of being great navigators, on par with birds, and are far less vulnerable to wind conditions than we thought.”

“By showing that it is technically possible to continuously monitor individual insects over migration, and to observe their flight behavior in detail, we hope to inspire more studies to answer many more big questions in this area.”

For the study authors, the next step is to answer the question of how moths are able to maintain such straight lines. “Based on past lab work, it’s possible that the insects are using internal compasses, both visual and magnetic, to chart their way around the world,” says Menz.