The language of the eyes

What is the significance of the sclera of our eyes? A question which researchers have been interested in for some time now. Recently a research team led by comparative psychologist Dr Fuhimiro Kano has succeeded in deciphering the mystery: The white of the eye contributes decisively to the visibility of directions of gaze through its basic colour properties.

When we talk to other people, we usually maintain eye contact with one another. We know exactly who is looking at whom and which unspoken messages the person is displaying using the "language of their eyes" or which object they are looking at. Whilst communicating this helps us humans to be able to identify the direction of the other person's gaze quickly and clearly. "We owe this to the formation of the whites of the eye. Humans might have evolved this distinguishing eye feature for conspecific communication," says Kano. "In doing so, humans have probably evolved a unique communicative style critical for their hallmark social activities." Kano is a junior group leader at the Centre for the Advanced Study of Collective Behaviour (CASCB), a cluster of excellence at the University of Konstanz. This study goes back to research he conducted with Yuri Kawaguchi and Hanling Yeow at Kumamoto Sanctuary at the Kyoto University.

The researchers also observed that participants of both species distinguished the eye-gaze directions of chimpanzees better when the contrast polarity of the chimpanzee eye was reversed compared to when it was normal; namely when the chimpanzee eye had human-like white sclera and a darker iris. Whiteness in the sclera thus facilitates the visibility of eye-gaze direction even across species. “Our findings thus support but also critically update the central premises of the gaze-signalling hypothesis” summarizes Kano his findings.

The novel aspect of the study is that the three researchers chose a cross-species design for comparison for the first time. In the experiments, they presented eye images to both chimpanzee and human participants. This is essential for distinguishing between several alternative hypotheses, Kano informs us. 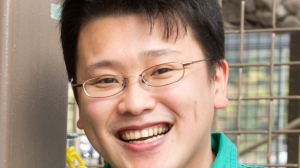 Dr Fuhimiro Kano is a group leader at the “Centre for the Advanced Study of Collective Behaviour” at the University of Konstanz. Previously, the psychologist worked at the Kumamoto Sanctuary of Kyoto University.