Pupils from all over Germany took part in the “Beschützer der Erde 2.0” (protectors of the earth 2.0) competition by developing project ideas on how to protect animals and their habitats. The winning teams were honoured for both their dedication and inventiveness during an awards ceremony on Mainau Island.

When pupils and students demonstrate their commitment to climate protection by participating in the "Fridays for Future" events, one thing becomes very clear: in matters of environmental and climate protection, today’s youth are calling for action. They are calling on the public to place more trust in science and to turn words into deeds. This same attitude was advanced by the young participants in the “Beschützer der Erde 2.0” school competition, which was organised by the German Aerospace Center (DLR) in cooperation with the University of Konstanz and the Max Planck Institute for Animal Behaviour in Konstanz.

Teams of pupils – from the eighth, ninth and tenth grades representing almost 100 schools in Germany – developed project ideas to protect animal habitats and preserve the biodiversity of our planet. For Martin Wikelski, Professor of Physiological Ecology and Animal Movement at the University of Konstanz and director of the Max Planck Institute for Animal Behaviour, this great interest and concern is proof that “younger generations understand how important our planet’s natural resources are, and they are beginning to tell the older generations – my generation: 'We have to act'”.

During the award ceremony on Mainau Island in May of 2019, the four winning classes presented specific ways to protect animal habitats: the pupils from the Neue Gymnasium Oldenburg won first place in the category “field and meadow habitats” with their project “stork, how are you doing?”, which aims to protect storks and their breeding and rest areas. The project from the Comenius Schule Berlin addresses overfishing and plastic pollution in water. This class developed an app for calculating one’s own individual "plastic heap" that accumulates through daily consumption. Pupils from the Gymnasium Papenburg presented their concept for developing an early forest fire warning system by tracking birds. Finally, the class project “light pollution in Bonn” from the Cardinal-Frings-Gymnasium Bonn was selected as the overall winner of the idea competition.

The pupils’ work on the effects of urban lighting on birds and insects, their flight routes and routines was recognized with the grand prize – a voucher for attending a MaxCine summer camp. MaxCine is the Centre for Communication and Exchange at the Max Planck Institute for Animal Behaviour, which promotes the exchange of knowledge between the research institute and society at large. 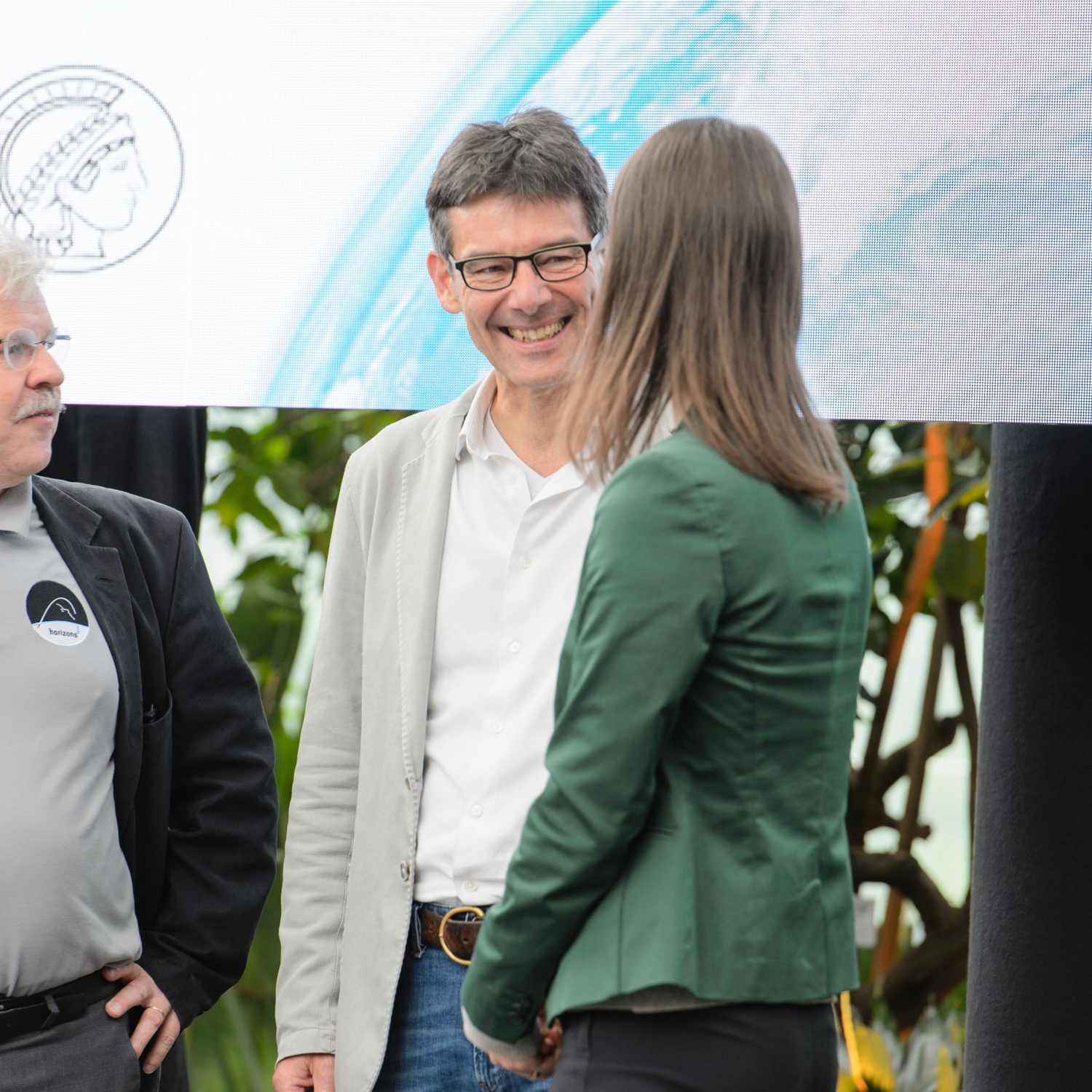 “Not only will the summer camp provide the winning class the opportunity to learn more about our research, but it will allow us researchers to receive feedback from the youth, including ideas on what we can do better. We want fantastic ideas, because those are the ideas that can be implemented in 10 or 15 years”.

Martin Wikelski explains further: “We need the youth perspective. We need young people who ask the big questions. Questions that are too fantastic for researchers to conceive of in their daily routines: What can the animals tell us? How good is the animals' sensory system when it is globally interconnected? How can we communicate with animals?” ICARUS was in fact such an idea, says Wikelski. This international research initiative for the global observation of animal movements via a satellite tracking system actually provided some of the data that the pupils used in their research.

The ICARUS antenna was attached to the International Space Station (ISS) during Alexander Gerst's Horizons mission last year. While the astronaut and ambassador of the “Beschützer der Erde” competition was not able to personally take part in the award ceremony, the audience did not loose sight of his commitment to this national youth competition. Both the competition’s mascot that Gerst took into space with him and a life-size cardboard standup of the astronaut were on display while Professor Reinhold Ewald, an ESA astronaut on the ISS in 1997, presented Alexander Gerst's breathtaking photos. 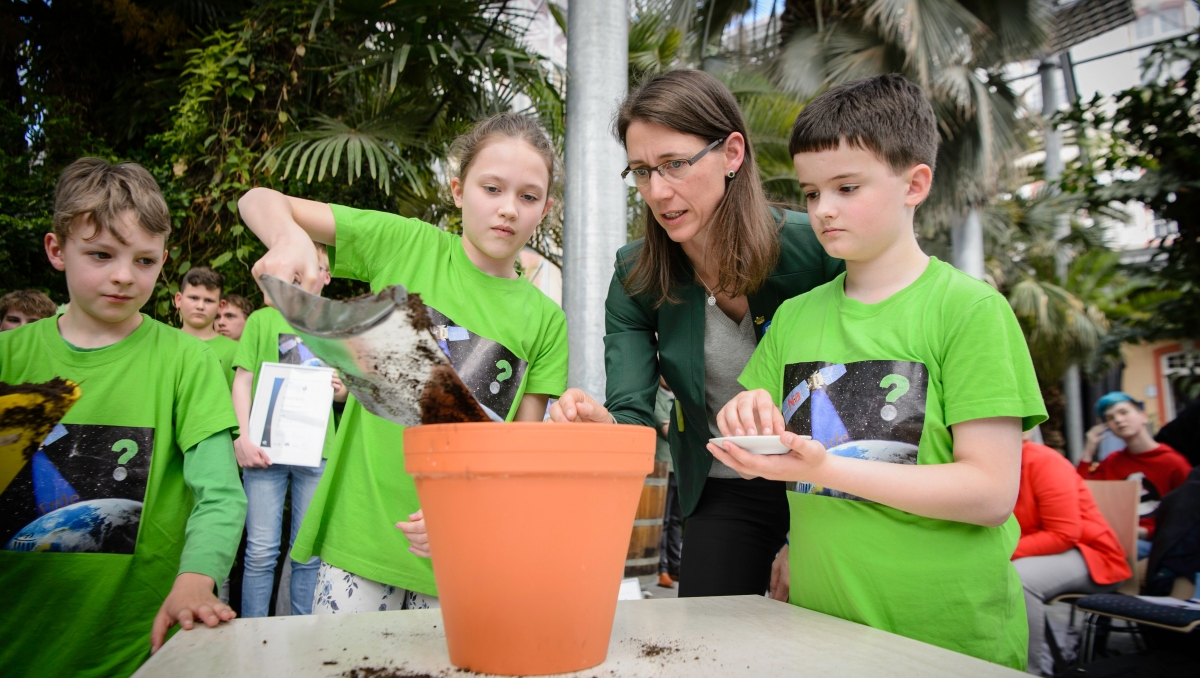 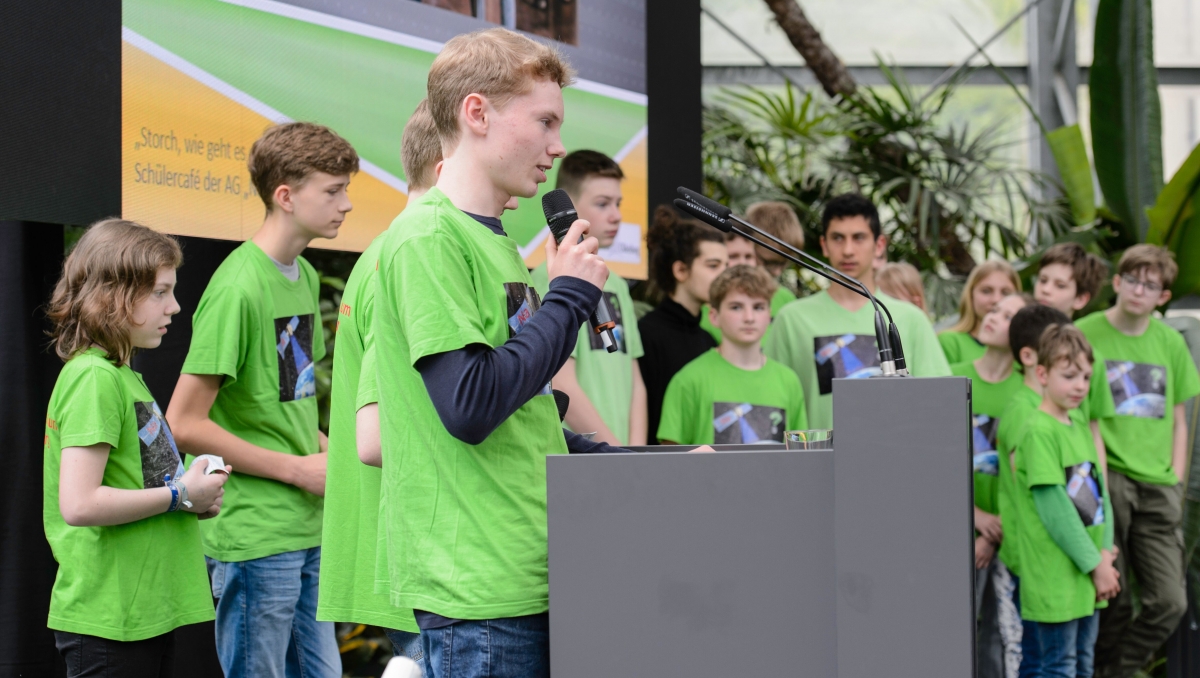 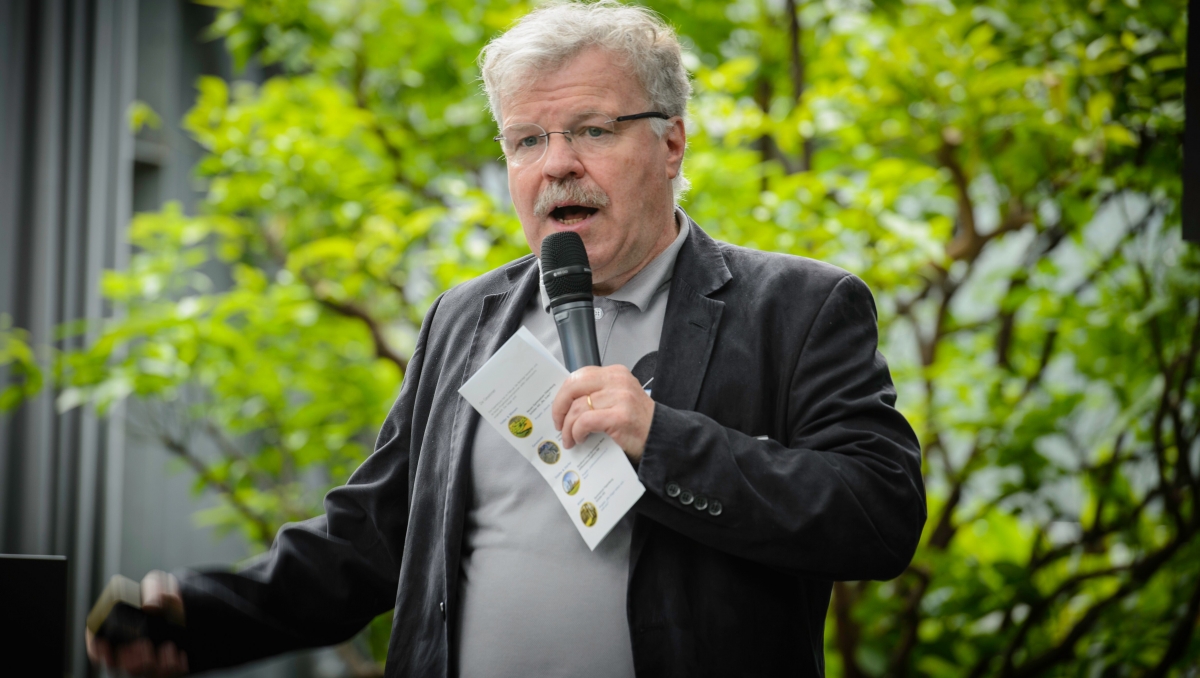 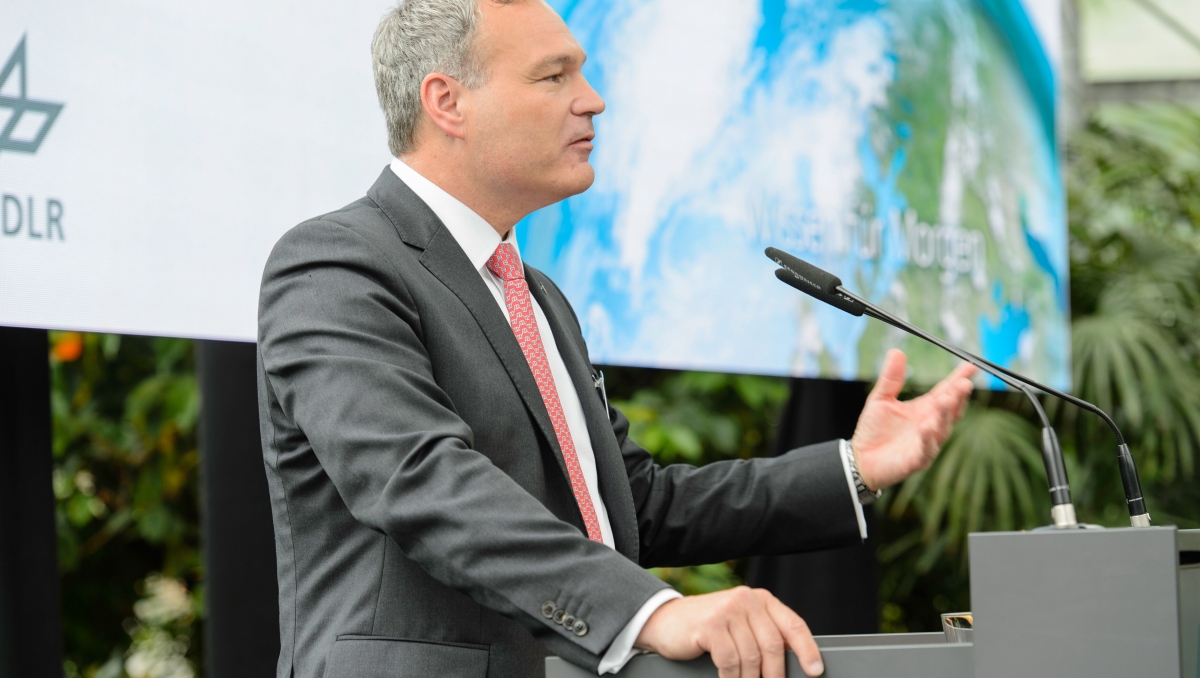 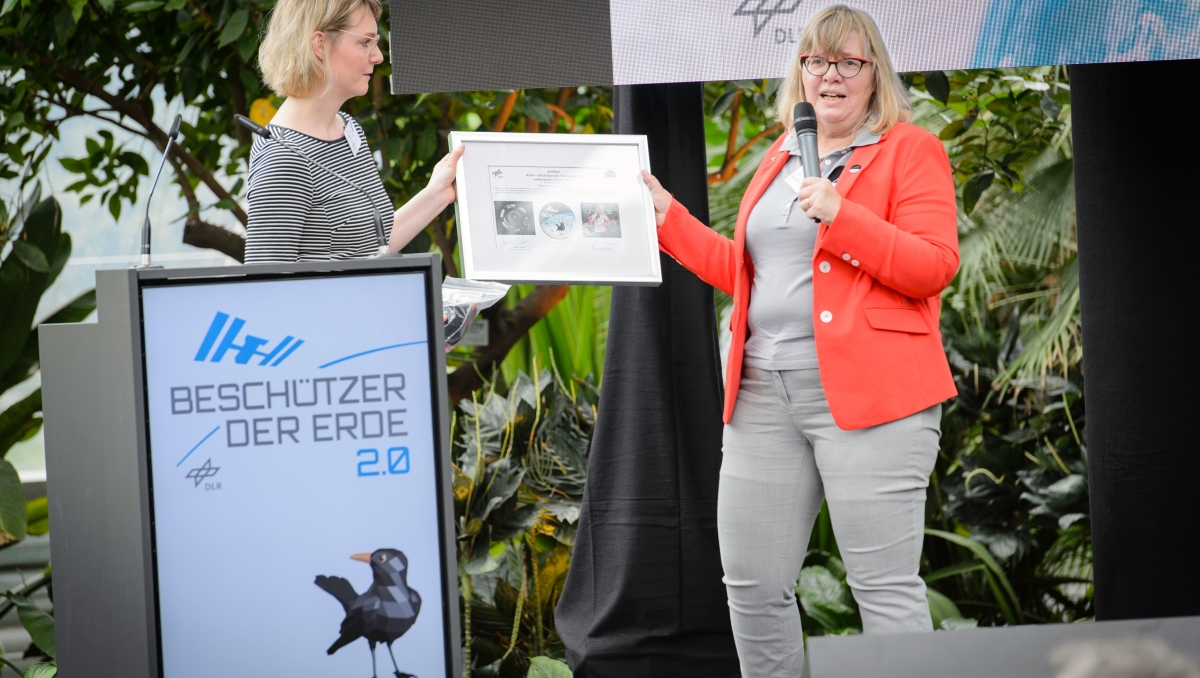 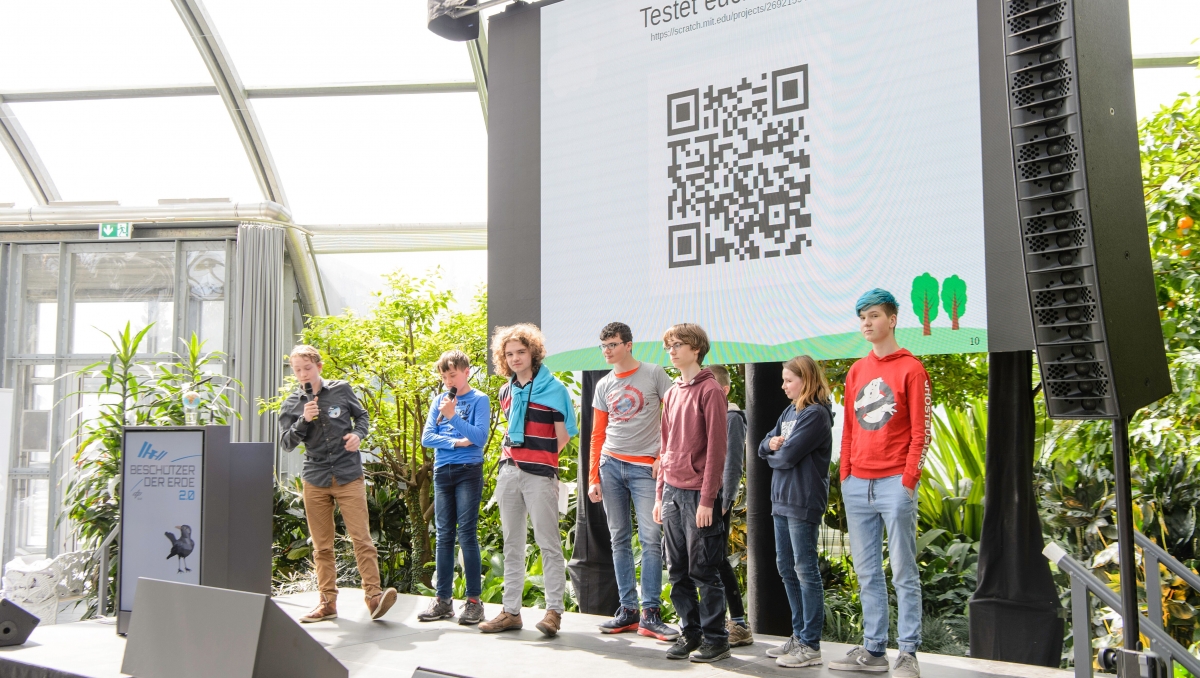 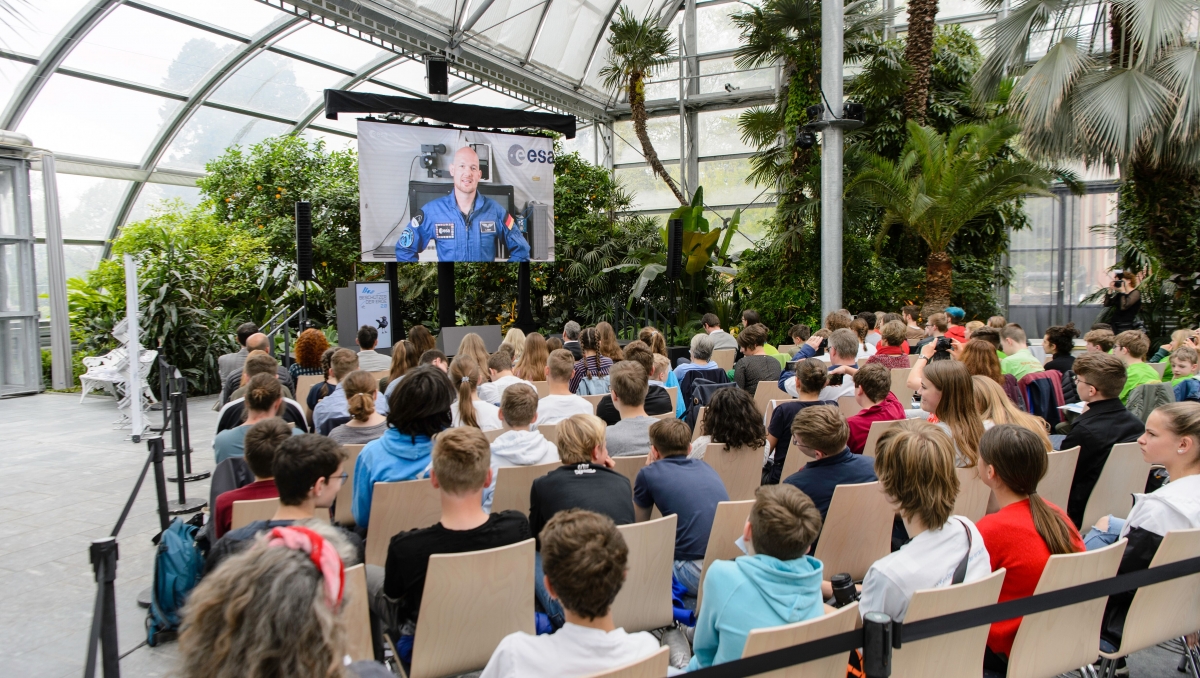 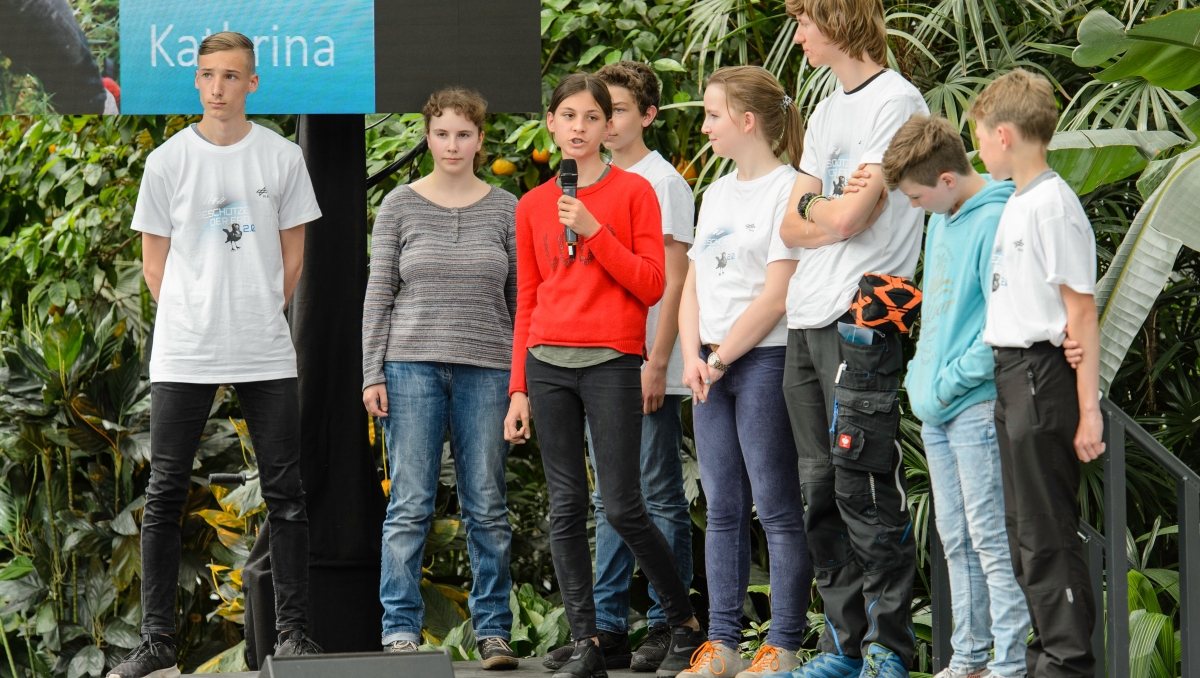 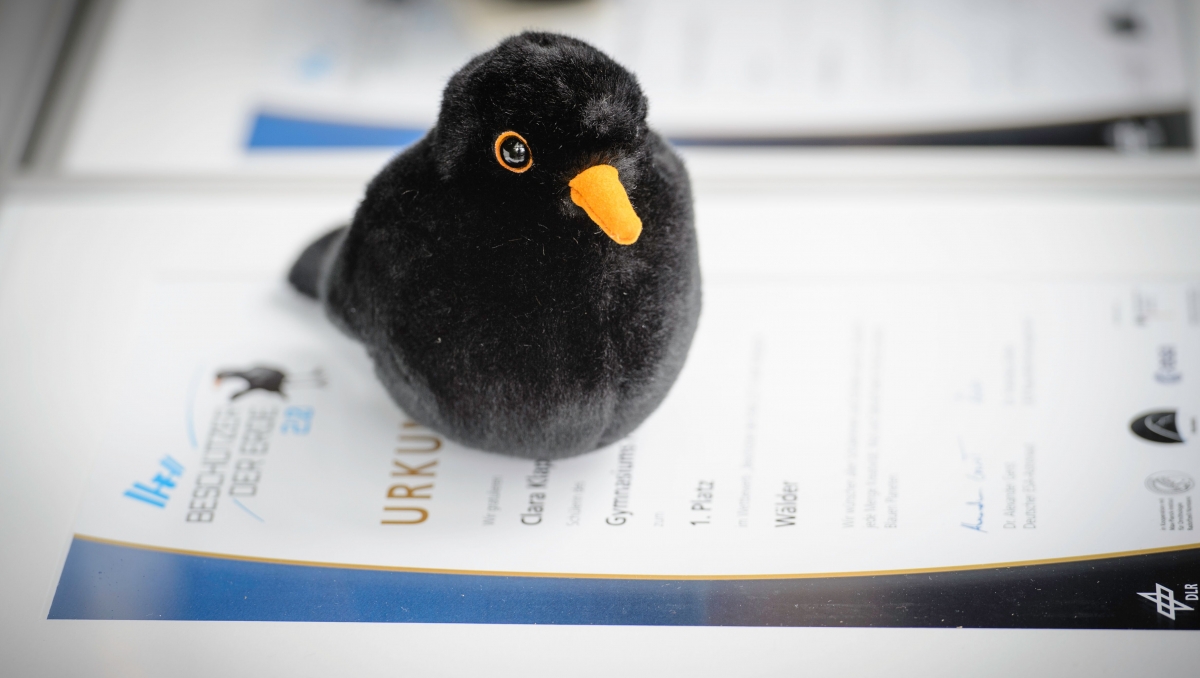 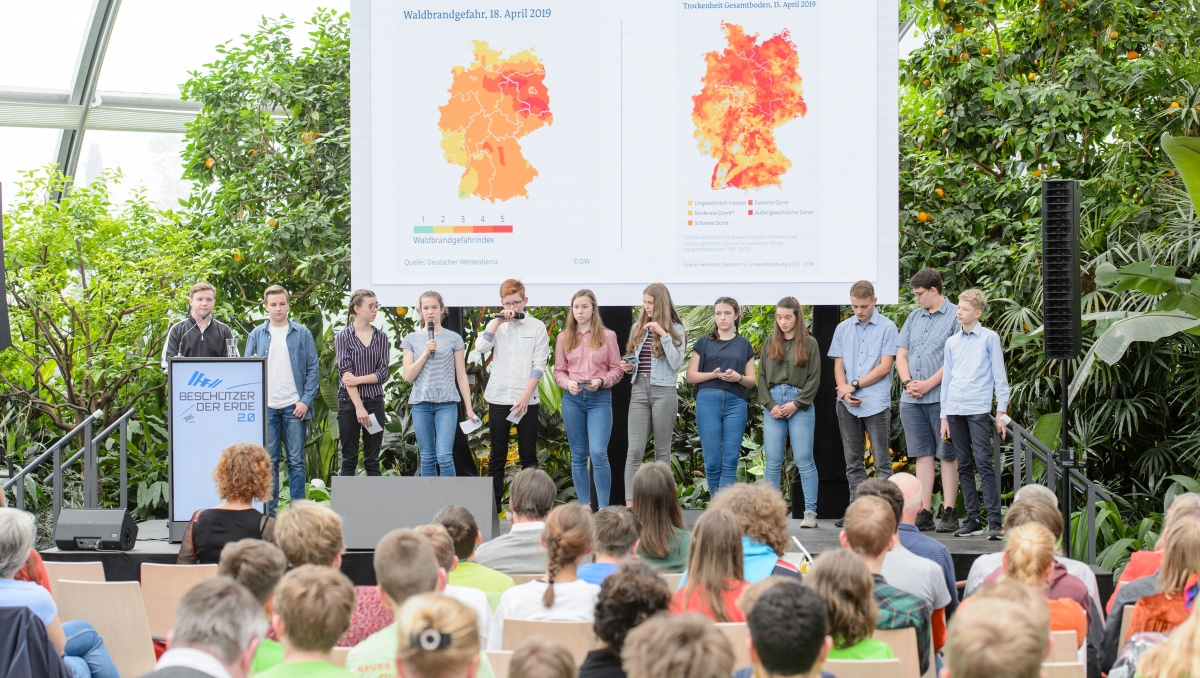 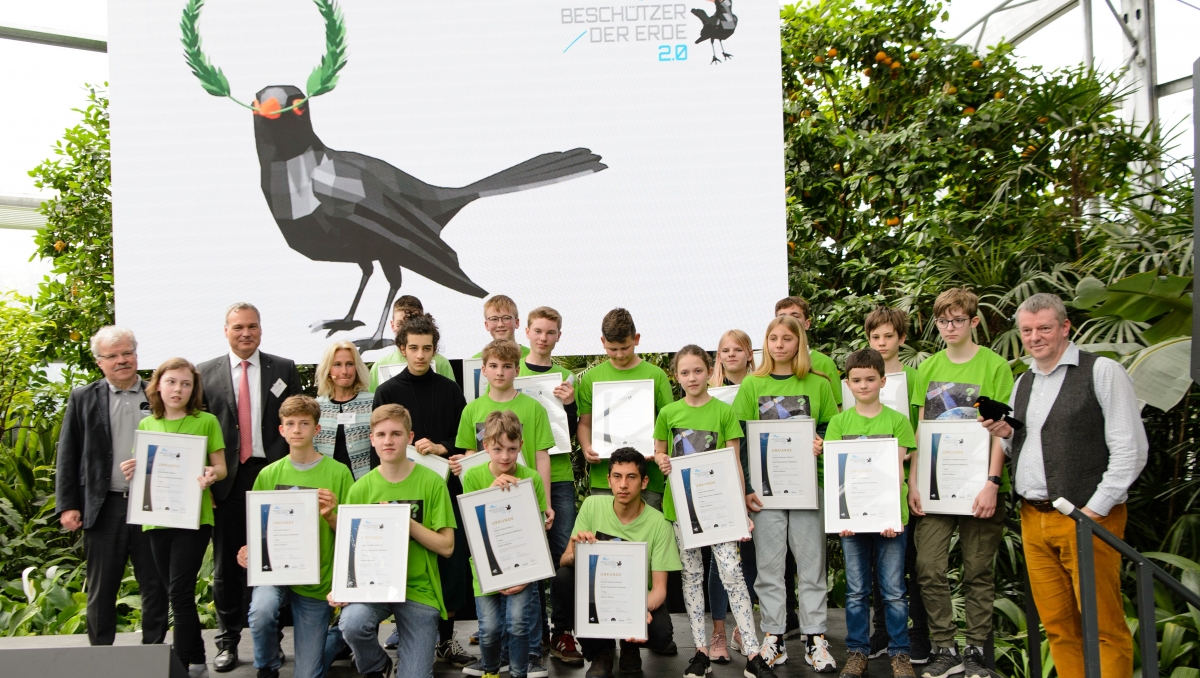 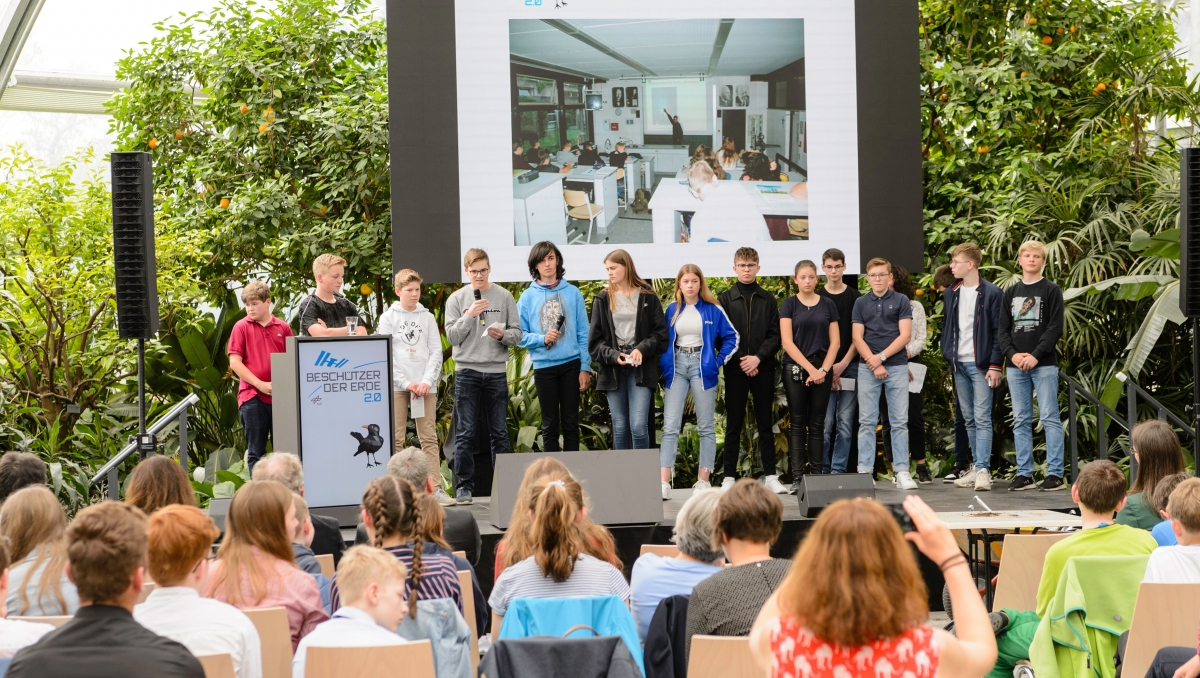 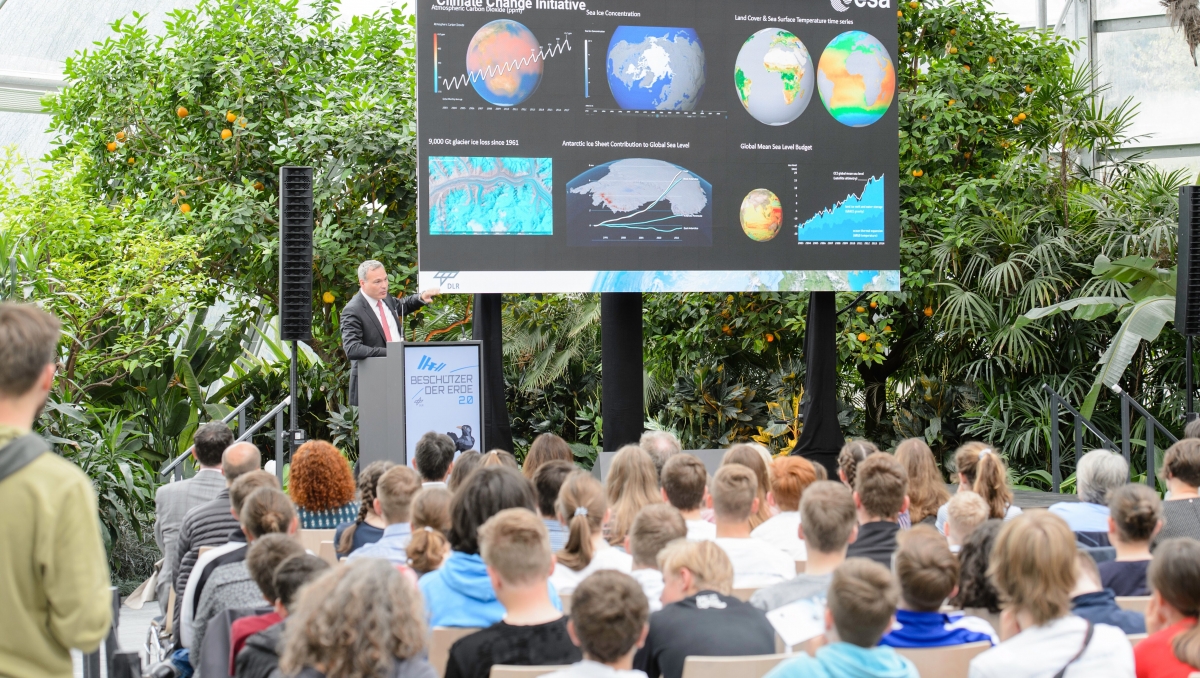 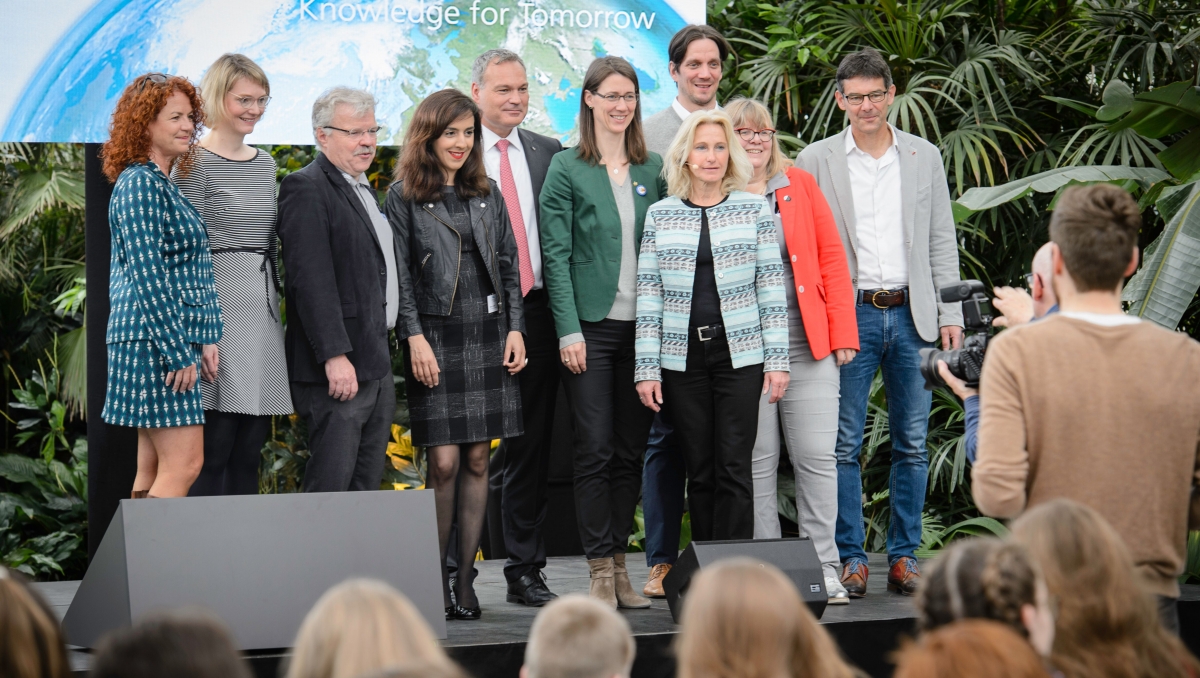 The so-called overview effect that astronauts experience when viewing earth from space is something that Ewald knows all too well. During his own mission over twenty years later, however, Gerst was able to take advantage of new ways of sharing this effect with audiences on our planet: digital photography and social media. He was thus able to communicate his concern for and commitment to protecting planet Earth. Gerst communicated this commitment to the dedicated pupils at the awards ceremony via a video message, calling on them not to discontinue their projects, but to develop them even further. “Be protectors of the earth for life!”, he told the youth as he thanked them for their own commitment to helping secure the future of our planet.