Migrating birds choose routes with the best wind and uplift conditions, helping them to fly nonstop for hundreds of kilometers over the sea.

Researchers at the Max Planck Institute of Animal Behavior and University of Konstanz in Germany have identified how large land birds fly nonstop for hundreds of kilometers over the open ocean—without taking a break for food or rest. Using GPS tracking technology, the team monitored the global migration of five species of large land birds that complete long sea crossings. They found that all birds exploited wind and uplift to reduce energy costs during flight—even adjusting their migratory routes to benefit from the best atmospheric conditions. Published today as open access in the journal Proceedings of the Royal Society B, this is the most wide-ranging study of sea-crossing behavior yet and reveals the important role of the atmosphere in facilitating migration over the open sea for many terrestrial birds.

However, recent advances in GPS tracking technology have overturned that assumption. Data obtained by attaching small tracking devices on wild birds has shown that many land birds fly for hundreds or even thousands of kilometers over the open seas and oceans as a regular part of their migration. 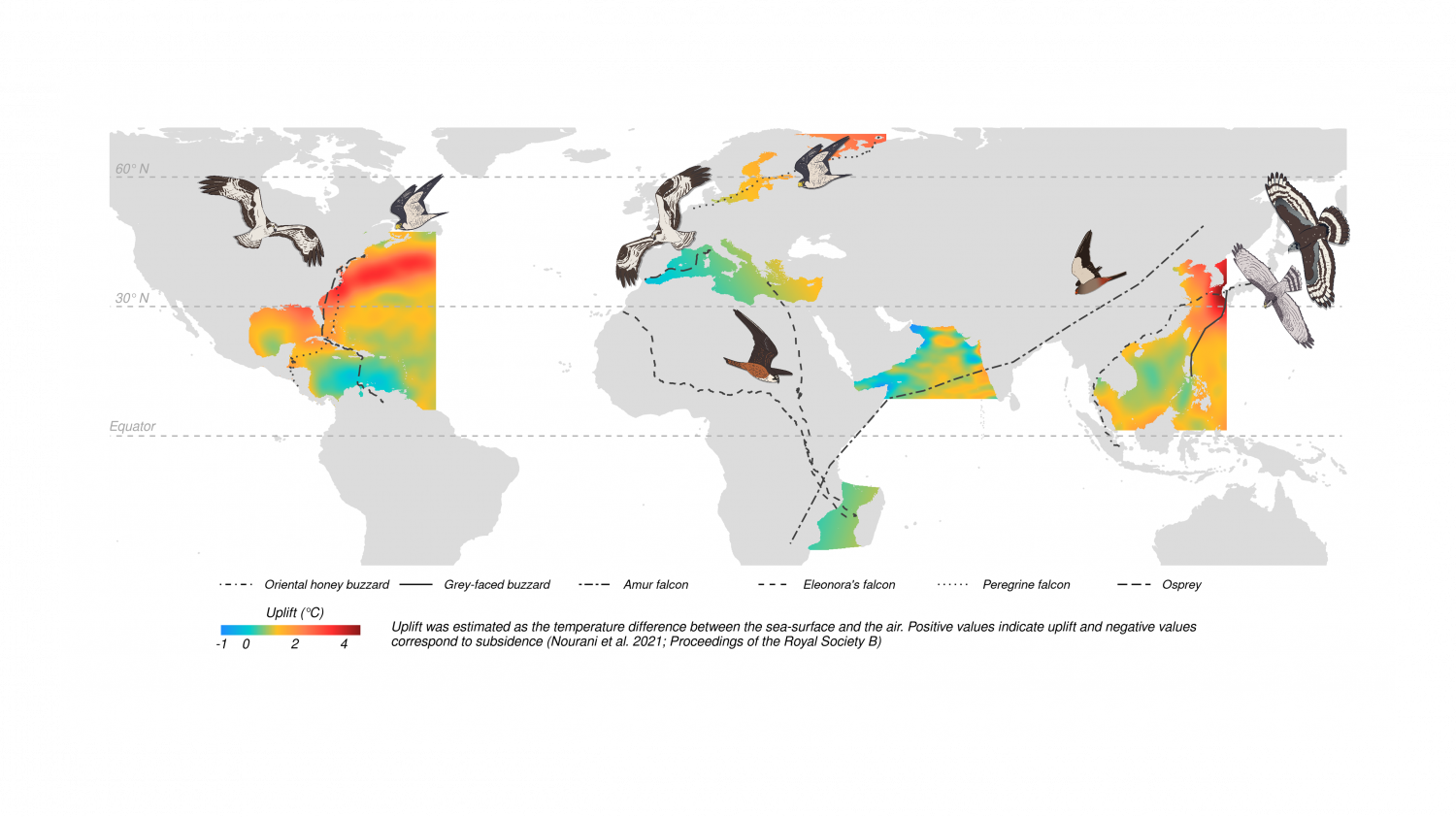 Terrestrial birds are capable of flying for hundreds of kilometers over the open sea. Nourani et al. show that the autumn migration trajectories of some of these birds correspond with uplift over the sea surface. Suitable uplift means less drag, making sea-crossing less energetically demanding. Moreover, strong uplift can allow the birds to soar.

But scientists are still unraveling how land birds are able to accomplish this. Flapping is an energetically costly activity, and trying to sustain nonstop flapping flight for hundreds of kilometers would not be possible for large, heavy land birds. Some studies have suggested that birds sustain such journeys using tailwind, a horizontal wind blowing in the bird’s direction of flight, which helps them save energy. Most recently, a study revealed that a single species—the osprey—used rising air thermals known as “uplift” to soar over the open sea.

Now, the new study has examined sea-crossing behavior of 65 birds across five species to gain the most wide-ranging insight yet into how land birds survive long flights over the open sea. The researchers analyzed 112 sea-crossing tracks, collected over nine years, with global atmospheric information to pinpoint the criteria that the birds use for selecting their migration routes over the open sea. A large international collaboration of scientists shared their tracking data to make this study possible.

The findings not only confirm the role of tailwind in facilitating sea-crossing behavior, but also reveal the widespread use of uplift for saving energy during these nonstop flights. Suitable uplift means less drag, making sea crossing less energetically demanding.

“Until recently, uplift was assumed to be weak or absent over the sea surface. We show that is not the case,” says first author Elham Nourani, a DAAD PRIME postdoctoral fellow at the Department of Biology at the University of Konstanz, who did the work when she was at the Max Planck Institute of Animal Behavior.

“Instead, we find that migratory birds adjust their flight routes to benefit from the best wind and uplift conditions when they fly over the sea. This helps them sustain flight for hundreds of kilometers,” says Nourani.

The oriental honey buzzard, for example, flies 700 kilometers over the East China Sea during its annual migration from Japan to southeast Asia. The roughly 18-hour nonstop sea crossing is conducted in autumn when the air movement conditions are optimal. “By making use of uplift, these birds can soar up to one kilometer above the sea surface,” says Nourani.

The study also raises the question of how migration will be affected by a changing climate. “Our findings show that many land birds are dependent on atmospheric support to complete their migrations over the open sea, indicating their vulnerability to any changes to the Earth’s atmospheric circulation patterns,” says Nourani. “Collaborative studies like this are important to unravel general patterns about how migratory birds depend on the weather patterns. This enables future studies to make robust predictions about how these birds will be impacted by climate change.”