To sting or not to sting?

Scientists from Konstanz and Innsbruck uncovered how honeybees organise their collective defence in response to predators and used computational modelling to identify potential evolutionary drivers of the behaviour.

When do bees sting and how do they organise their collective defence behaviour against predators? An interdisciplinary team of researchers from the Universities of Constance and Innsbruck has provided new insights into these questions. Their study, published in BMC Biology, combined behavioural experiments with an innovative theoretical modelling approach based on “Projective Simulation”. It shows that individual bees decide whether to sting – or not – based on the presence and concentration of an alarm pheromone. The scientists suggest that each bee has a likelihood of stinging that is not constant, but shows at least two internal thresholds for the concentration of the pheromone: one to start stinging and one to stop stinging. The computational modelling also revealed how several environmental factors, such as the rate of predator attacks and predator diversity, likely drove the evolution of the honeybees’ pheromone-based communication in their defensive behaviour.

High concentrations of alarm pheromone as a stop signal
When a honeybee colony is attacked by a predator or seriously disturbed by a human who – accidentally or intentionally – got too close to the hive, the bees of the colony launch a coordinated counterattack to defend the colony and to scare off the trespasser. An important stimulus for them to start chasing and stinging the intruder is the presence of an alarm pheromone, which the bees carry on their stinger. In the event of an attack, the pheromone is dispersed either actively – by guard bees – or automatically upon stinging – by recruited soldiers. Thus, it carries information not only about the presence of an attacker, but also about the extent of the colony’s counterattack. “The more bees have stung the intruder, the more alarm pheromone has been released with each sting and the higher its local concentration,” clarifies Dr Morgane Nouvian, a biologist from Konstanz and joint-lead author of the study together with Andrea López-Incera from Innsbruck.

To understand how individual bees from the hive may use this information to make the ultimate decision to sting for the good of the colony and possibly die as a result, the scientists observed individual stinging responses of Western Honeybees (Apis mellifera) from three colonies. Using different concentrations of natural and synthetic alarm pheromones and a dummy predator, they revealed that the aggressiveness towards the dummy – measured as the stinging likelihood – initially increases with the concentration of the alarm pheromones until it reaches a peak. However, at high concentrations, the aggressiveness drops back to a low level. 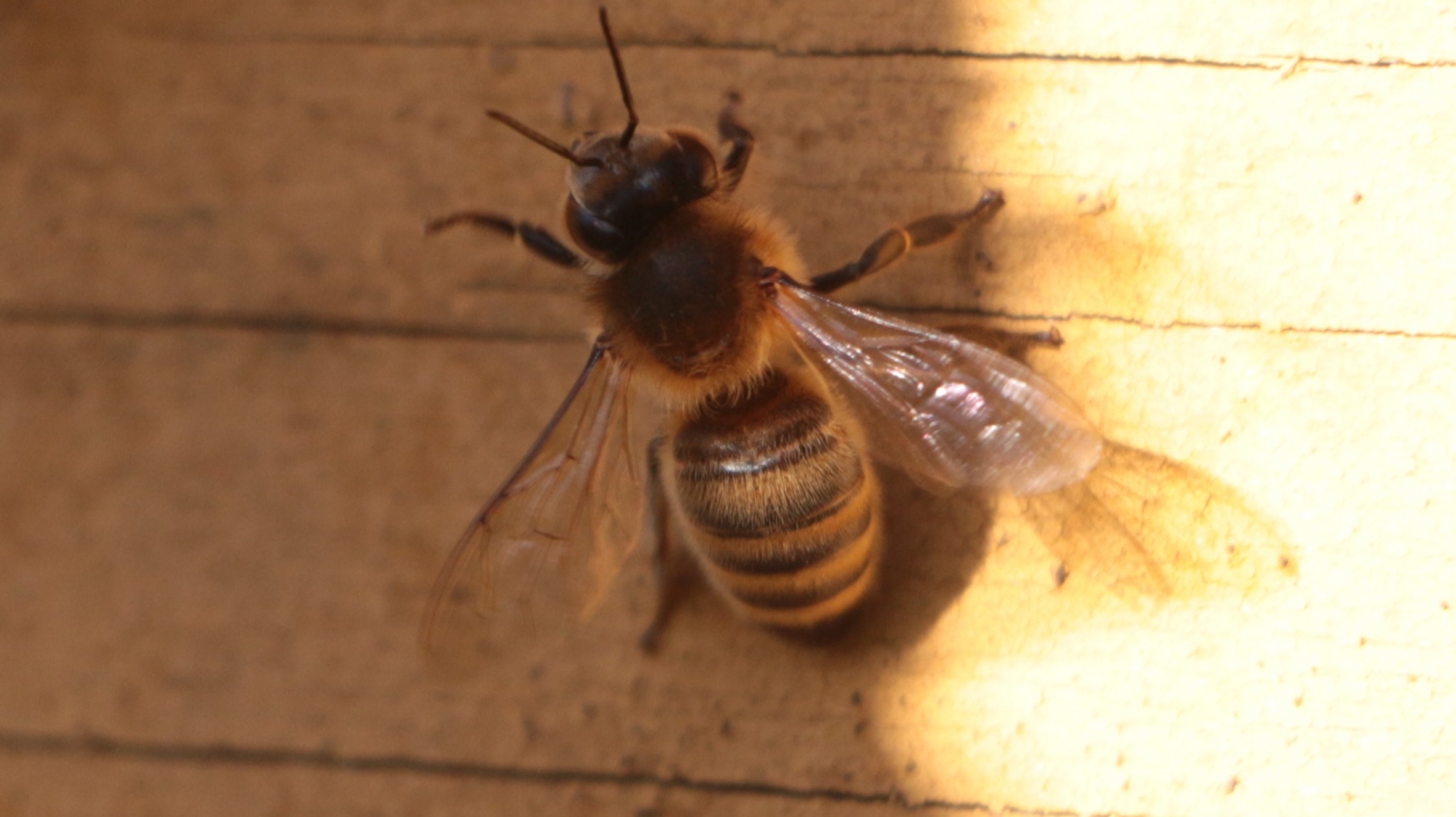 This is the first time decreasing aggressiveness at high pheromone concentrations has been demonstrated under controlled experimental conditions. “One possible function of this ‘stopping’ effect of high concentrations of the alarm pheromone could be to avoid over-stinging and unnecessary sacrifice when attacking an already defeated intruder,” Nouvian suggests.

The “superorganism” as an evolutionary unit
In social insects, be they honeybees or other social species such as army ants, individuals often coordinate their actions for the benefit and survival of the colony. For this reason, evolutionary selection processes in these insects acts on the group rather than the individual level. “Normally, if an organism dies, it cannot pass on its genes to the next generation anymore. In a bee colony, however, it is the queen that is responsible for reproduction. If another bee dies defending the hive but saves the queen in the process, the colony will continue to reproduce,“ Nouvian exemplifies. Because the bee colony functions as a single ‘superorganism,’ the behaviours of the belonging individuals can only be understood through the collective outcome to which they contribute.

To further analyse their experimental results and address this peculiarity of the evolution of collective behaviours, the scientists used computational modelling based on so-called Projective Simulation, an approach originally developed by co-author Professor Hans Briegel and his colleagues from Innsbruck. In their agent-based model, each agent or “bee” has a very limited set of percepts – the concentration of the alarm pheromone and a signal that the predator is leaving – and actions – to sting or not to sting – relevant to the defence behaviour. “Our idea was to build a model that is realistic, yet minimal,” explains Professor Thomas Müller, professor of philosophy at the University of Konstanz and co-author of the study. He continues:

“We simulated a collective of these agents, which were called upon one after the other to perceive the current level of alarm pheromone at any given time. When a bee stings in response, the pheromone’s concentration increases and the next bee’s response depends on this new pheromone level.”

Professor Thomas Müller, professor of philosophy at the University of Konstanz

A second important aspect of the model is that it includes a learning component: Neither the responses of individual bees nor the rules of interaction between them are predetermined. Instead, they “evolve” over many cycles of the simulation or, in other words, over many generations of the collective. “If the decisions of the individual agents are beneficial to the collective under certain environmental pressures, they are positively reinforced. This increases the likelihood that the next generation of agents will act similarly under identical conditions,” Müller clarifies. Taken together, the agent-based approach with reinforcement learning at the group-level allowed modelling of the observed defensive behaviour of honeybees from the perspective of both, the individual bees and the collective.

Putting the model to the test
Using the model and different parameter combinations, predictions could be made about the possible influence of environmental pressures on the defensive behaviour of bees. For example, the simulations suggest that colonies adapt to the strongest predator they encounter. This means that colonies that primarily encounter weak predators, such as mice or toads, are less likely to sting at high pheromone concentrations than colonies that more frequently encounter strong and difficult-to-deter predators, such as bears. “For the survival of the colony, it makes perfect sense to be able to cope with the worst predator around, even if that means over-stinging some of the weaker predators,” Nouvian describes. 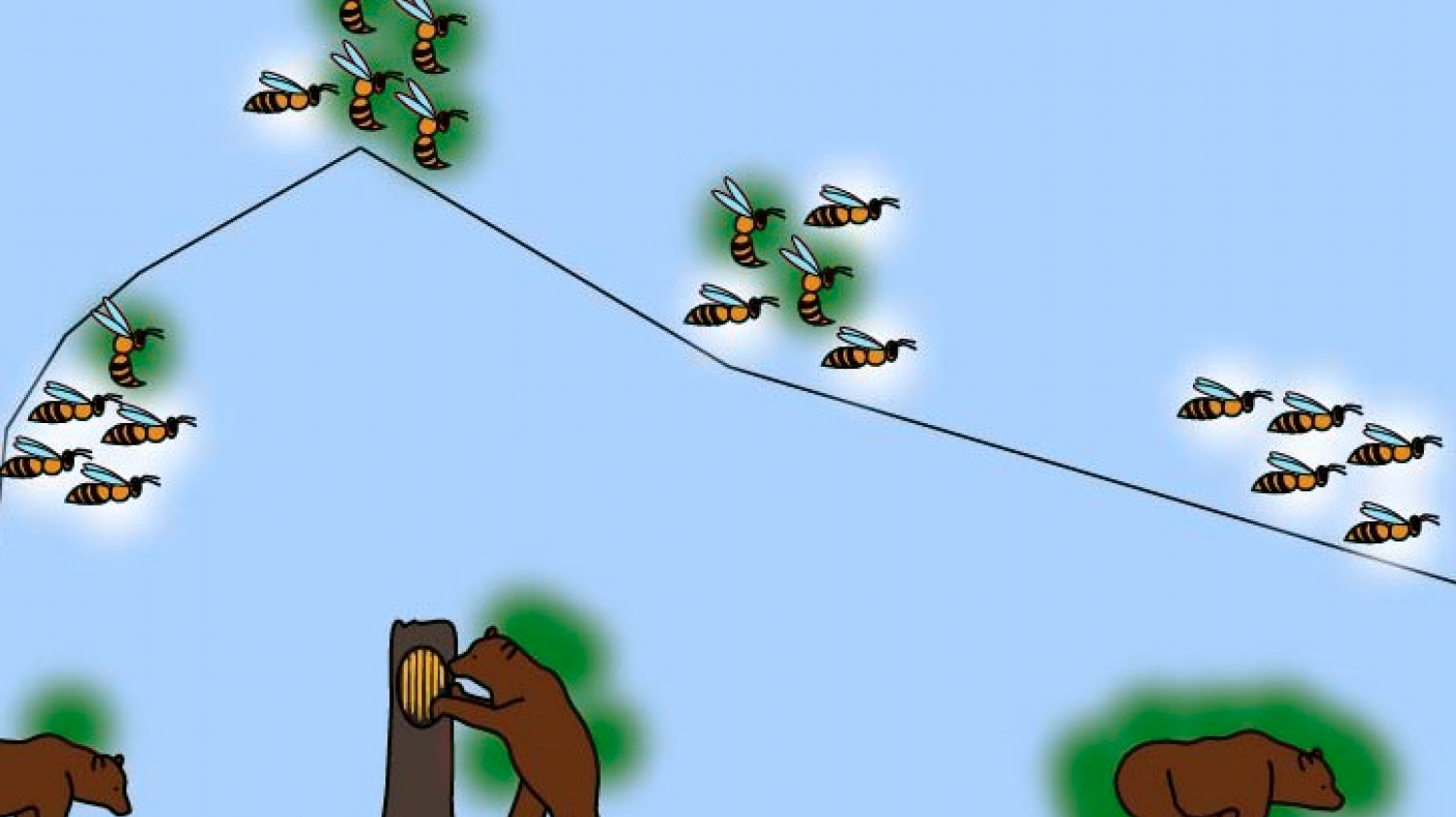 The scientists also applied their model to the case of the notoriously aggressive “African bee", a subspecies of the Western honeybee. It has previously been suggested that the highly aggressive behaviour of this subspecies evolved in response to higher predation rates in the tropics and to highly specialised, hard-to-deter predators, such as honey badgers. Indeed, the simulation predicted that bee populations suffering from a high predation rate and predators that take a high number of stings before stopping their attack develop stronger defence responses than those that do not.

What’s next?
“We were quite happy to see that our model supports the current hypotheses on how the higher aggressiveness of ‘African bees’ might have evolved. One of the next steps will be to collect empirical data from real bees in Africa to verify the results,” Nouvian gives an outlook. Another step for the future is to model a more diverse population of bees. As mentioned before, there are at least two different types of bees involved in the defence attack of a real hive: guards and recruits. “In the current model, each bee in the collective followed the same decision-making process. Training a model with two different types of agents and comparing it with experimental data will be very interesting,” Müller adds. In general, the modelling approach is highly versatile and can be applied to other tasks and species, providing a valuable new tool for studying the evolution of collective behaviour.

The project was funded by the German Research Foundation (DFG), the Ministerium für Wissenschaft, Forschung, und Kunst Baden-Württemberg (MWK), the Austrian Science Fund (FWF), the Zukunftskolleg of the University of Konstanz, and the Volkswagen Foundation.