Humboldt Research Fellowship for University of Konstanz biologist: Behavioural ecologist Dr Vlad Demartsev from Tel Aviv University, Israel, is granted a prestigious Humboldt Research Fellowship for Postdoctoral Researchers that enables him to continue his work in Dr Ariana Strandburg-Peshkin’s Gips Schüle Research Group on Communication and Collective Movement, based at the Department of Biology. As a Humboldt Postdoctoral Research Fellow, Demartsev will look into the motivational phase of vocal signalling in meerkats in an attempt to better understand how these animals plan and prepare their vocalisations.

Vlad Demartsev likes to get his hands dirty. He is passionate about being out in the field, doing what he does best: Study how mammals communicate in social settings using a range of vocalisations. For the past nine years, he has investigated the interplay between different aspects of an animal’s social environment and different aspects of signalling tactics and signal structure.

“How is collective movement mediated by communication?”

Turn-taking in rock hyraxes and meerkats
Originally from Israel, Demartsev has spent the better part of his academic career researching vocal interactions in various animals, including meerkats and rock hyraxes, a medium-sized mammal native to Africa and the Middle East. Among other things, he has investigated how the presence, composition and attentive state of conspecific audiences affect individuals’ signalling behaviour. “As regards rock hyraxes, I mainly focused on males, which employ long-range advertisement calls that are quite complex and can be heard over long distances”. Rock hyraxes live in groups composed of several females and one resident male. As part of his doctoral project, Demartsev studied how long-range calls help bachelor males introduce themselves to a group of females that they wouldn’t have access to otherwise. “These calls reflect their physical state, their hormonal levels and their overall quality as potential mates”, he explains.

In this context, Demartsev has also explored how individuals are able to maximise their signalling results and to reach a more abundant and attentive audience by correctly timing their signalling events or producing signals that are more effective in gaining and maintaining audience attention. “Sometimes, the males will use important events in the area – such as a predator on the prowl or when an alarm call has been given – to start singing and thus to make the most of an already attentive audience. It appears that rock hyrax males know perfectly well when they’re safe and are able to identify an opportunity for self-advertisement if it presents itself”.

The singing interactions of male rock hyraxes eventually led him to take interest in turn-taking and different coordination tactics occurring in communication exchanges. “From rock hyraxes I eventually moved on to meerkats, which is a flagship study system for biologists in terms of group communication and social communication in general”, Demartsev continues. While a postdoctoral researcher at the University of Zurich, he met Dr Ariana Strandburg-Peshkin, who established a research group on Communication and Collective Movement funded by the Gips Schüle Foundation at the University of Konstanz in 2018. The group works mainly on the mechanisms and consequences of collective behaviour in biological and social systems and contributes to the research carried out by the University of Konstanz’s Cluster of Excellence “Centre for the Advanced Study of Collective Behaviour”.

Coordination through communication
Strandburg-Peshkin’s team is especially interested in how animal groups make collective decisions and coordinate collective action, and in particular how these processes are affected by the social relationships between group members and the communication strategies they employ. While still in Zurich, Strandburg-Peshkin and Demartsev began working together on vocal coordination and turn-taking dynamics in meerkats, a study system that they continue to use today, alongside spotted hyenas. Specifically, they looked into turn-taking in group contexts, showing that meerkats tend to avoid overlapping each other’s calls by temporarily suppressing their call rates. “What’s interesting is that, in the long term, they then increase their call rates again”, explains Strandburg-Peshkin. “This means that we’re potentially looking beyond a simple call and response dynamic”.

At the University of Konstanz, the researchers have access to new technology that allows them to record the vocalisations made by all individuals within a group and to attribute them correctly. “It’s a really exciting time right now”, Strandburg-Peshkin says. “Previously, we only had microphones held up to individual meerkats, so we didn’t really know what was going on with the other individuals of the group in the background. Now we’re using GPS audio collars that record audio and location data for each individual”. Thanks to the new technology the researchers can now study group coordination across different species and using a much wider range of information that paints a more complex picture of decision-making and coordination in animal collectives.

“Thanks to Vlad’s Alexander von Humboldt Research Fellowship, which is for the maximum funding period of two years, we can really push our shared research agenda forward now”, says Strandburgh-Peshkin. “His expertise is in mammalian communication and his approach much more field-oriented, whereas I come from a collective behaviour perspective and have an analytical and computational background. Our skill sets are quite complementary”.

Humboldt Research Fellowships for Postdoctoral Researchers are highly competitive and awarded to international researchers with above average qualifications who are at the beginning of their academic careers and within four years of completing their doctorate.

Meerkat conversation dynamics
The Communication and Collective Movement team is currently trying to understand how meerkats coordinate collective movement. In so doing, they are building on several decades of field work carried out by collaborator Professor Marta Manser from the University of Zurich. Manser is an expert in meerkat communication and cognition and the co-director of the field site in the Kalahari Desert (Kalahari Research Centre (KRC) where both Strandburg Peshkin and Demartsev have studied meerkat behaviour. “Marta Manser has worked with these animals for over 20 years”, says Strandburg-Peshkin. “She is the reason why their call system is so well understood and hence why we are able to start looking at more complex things such as conversation dynamics”. Which is precisely where Vlad Demartsev’s research project comes in: Within the wider research agenda of the Communication and Collective Movement group, he will study the communication dynamics side of collective meerkat behaviour – meerkat conversation dynamics. 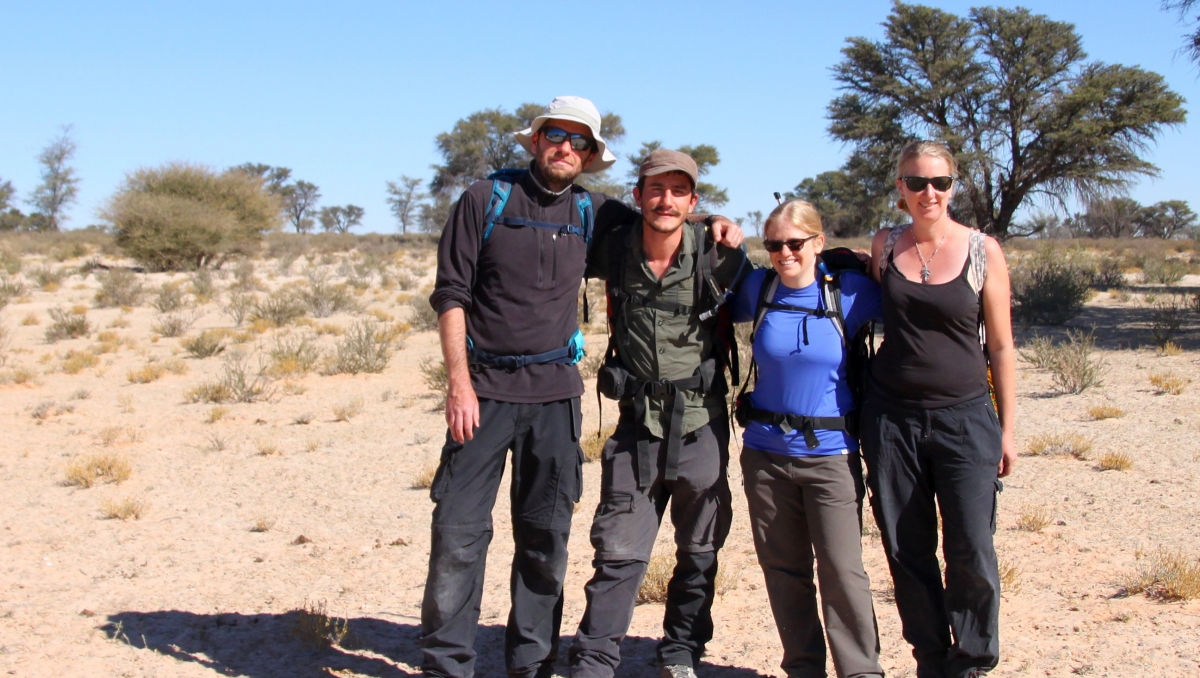 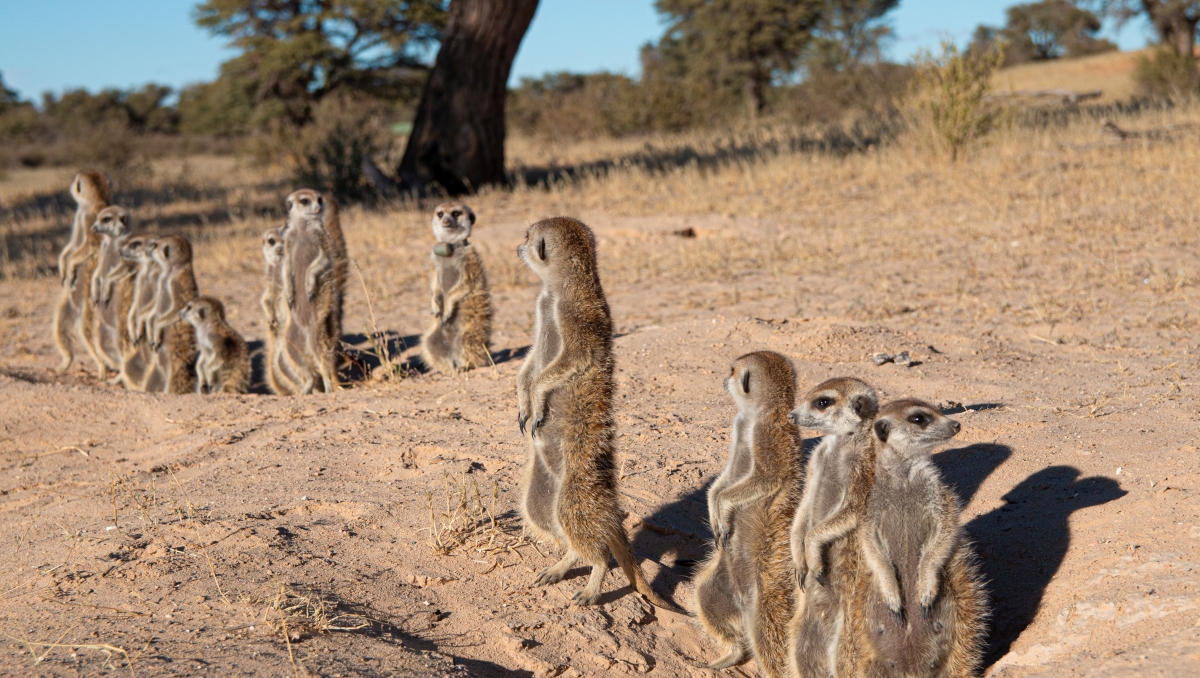 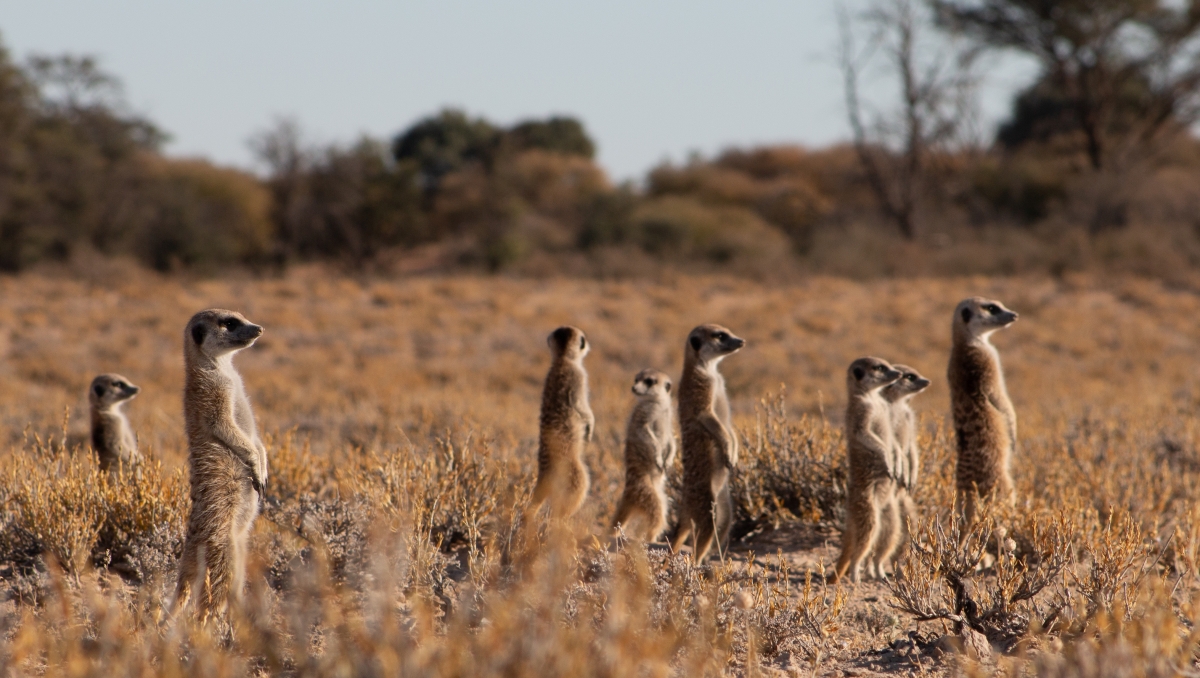 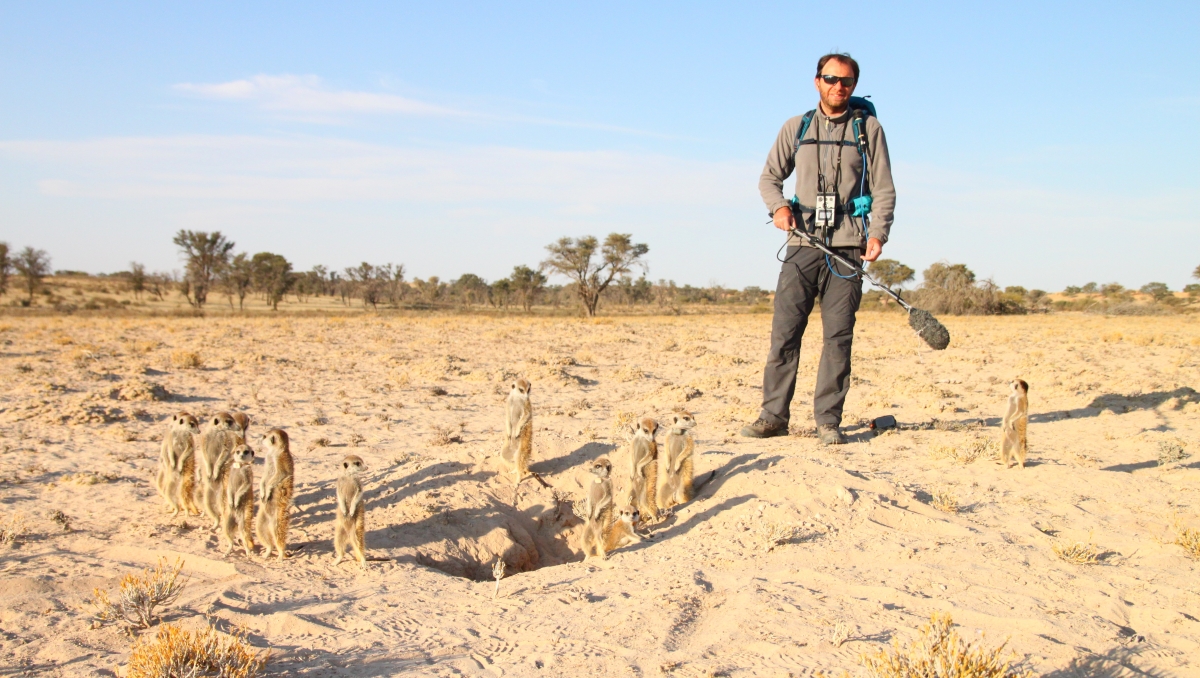 Vlad Demartsev during a playback experiment with a group of meerkats.
© Communication and Collective Movement Group
5 von 6
Text ausblenden 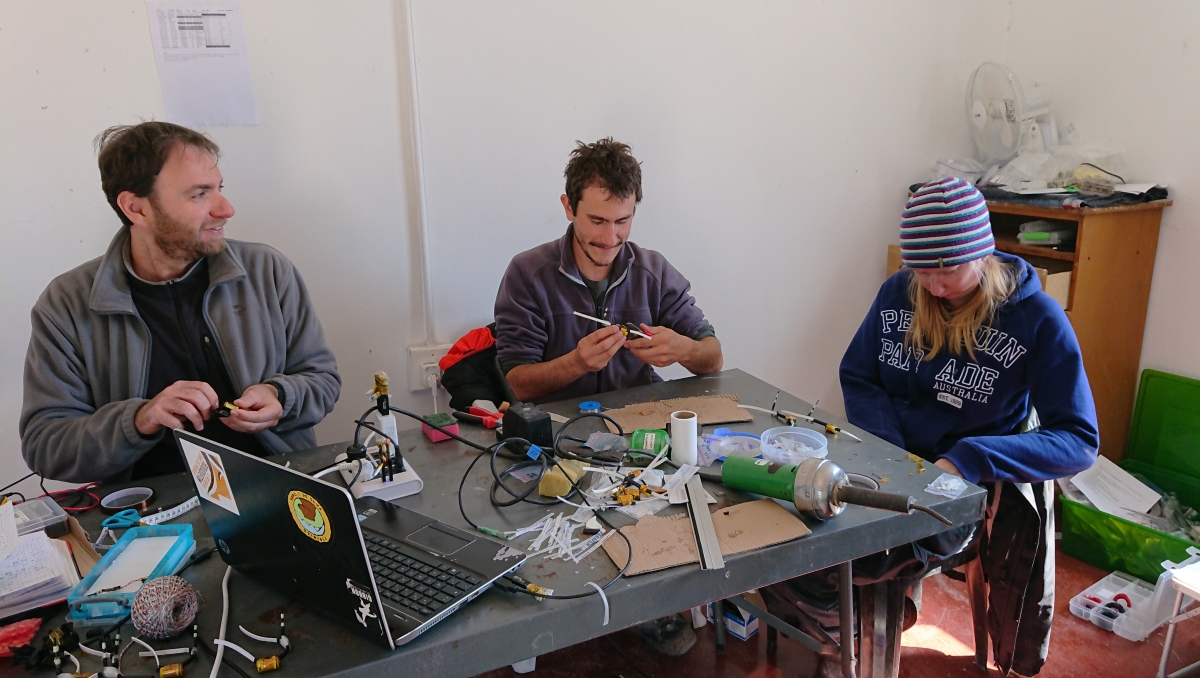 “I’m interested in both the motivational phase of vocal signalling”, Demartsev explains, “and in the interplay between different types of calls over longer periods of time”. To that end, he will study how meerkats coordinate their vocalisations so as not to interfere with each other’s calls on the one hand, and, on the other hand, how vocal interaction progresses over a longer time frame of several consecutive call turn exchanges. “Sometimes it may be opportune for one individual to interfere with the calls of another and sometimes it is not – I hope to understand why and how this depends on the previous communication rounds with this specific individual, on the received information and also on the potential audience of the interaction”.

Eventually, this may yield insights into individual animals’ preferences regarding their audiences or individual conversation partners and allow Demartsev to gain a deeper understanding of the social organisation of meerkat groups: “We’re just starting to look into how these animals communicate on a detailed, individual level. In meerkats as in other mammals, including humans, communication is, in the first instance, about ensuring that information is transferred efficiently. I want to understand how that happens within groups that grow to 15 or more individuals. We know that there is a dominance hierarchy, but this is not the only factor. There are others, such as relationship status and family membership, age class and so on. We simply don’t quite know yet how all of these relate to and potentially influence each other. Another question I’m trying to answer is thus whether meerkats choose a specific target audience for specific types of calls and if they do, how they identify these audiences”.

Have you ever wondered what a foraging meerkat sounds like? Visit the Communication and Collective Movement website to listen to a brief clip.

Uncovering the secrets of meerkat conversation dynamics has been and will be a collaborative venture – of that both researchers are certain: “With the new and more complex tracking technology come new challenges. In our line of research, we face engineering challenges as well computational challenges, i.e. we need to find ways of obtaining, processing and analysing the data to infer something of biological relevance. The analysis has to be informed by the biological knowledge, but it should also generate new biological insights. There is no one person who can bring to the table all of those skill sets. Our project is a great example of how collaboration across disciplines and individual backgrounds can work”.

The Rus en Vrede site of the Kalahari Meerkat Project.